Titley is a village and civil parish in Herefordshire. It lies along the B4355 between Kington, Herefordshire and Presteigne, Radnorshire.

It is in the Wigmore Hundred. The Iron Age fort of Wapley camp lies nearby.

The village is recorded in the Domesday Book as Titelege, a name derived from Old English which apparently means "Tita's woodland clearing".[1] 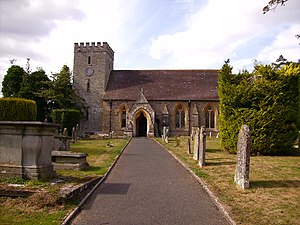 The village of Titley has been occupied for over a thousand years and there is evidence of a pre-conquest priory in the village dedicated to a little-known Welsh saint which later became subordinate to the Tyrone Abbey in France.[2] Later King Henry V granted the priory to Winchester College.

Of the priory that once stood here, nothing remains apart from its moat.

Titley lies at the junction of two drover's roads and was used for the weighing of wool.

Titley's parish church, dedicated to Saint Peter was rebuilt in 1869. The Stagg Inn, known as The Balance until 1833, became in 2001 the first pub in the United Kingdom to be awarded a Michelin Star.[3] 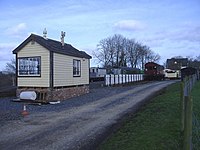 A mile-long section of the former Leominster and Kington Railway was reopened in 2005. Known as The Kingfisher Line, the section is privately owned and is open to the public only by prior arrangement.[4] 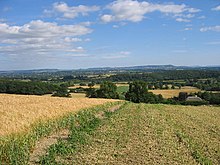