Tintwistle is a village in Cheshire, in the high hills in very north-eastern part of that county, its parish being the easternmost in Cheshire and forming a division between Derbyshire to the south and Yorkshire to the north. According to the 2001 census the parish had a population of 1,401.

Tintwistle lies at the lower end of Longdendale, just north of Glossop in Derbyshire. It is divided in two by the busy A628 road. The older part of the village sits on the northern side of the road, set back on the valley side.

The well in the old part of the village is decorated every year as part of the custom of well dressing, one found elsewhere in the Peak District. There is also a Children's Gala held each summer.

Tintwistle has a cricket club, Tintwistle Cricket Club[1] and a football team, Tintwistle Villa FC, who challenge in the Hope Valley Premier League. [2]

Tintwistle hosts an annual race around the local reservoirs in which young and old from the village and surrounding areas compete. The children's race has been won twice by "Tinsleonian" Lyam Bradley who is joint record holder with Kurtis Lindsay who has also won it twice. 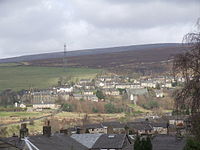