The Wrekin is a most distinctive hill of 1,335 feet in eastern Shropshire. It stands alone on the Shropshire Plain, four miles west of Telford.

The Wrekin is an ancient place, and a prominent and well-known landmark, marking the entrance to Shropshire for travellers westbound on the M54 motorway.[1]

The Wrekin is contained within the northern panhandle of the ‘Shropshire Hills Area of Outstanding Natural Beauty’. The hill is popular with walkers and tourists and offers good views over the county. The Wrekin can be seen from afar off, from much of Shropshire and even from the edge of the Peak District, from the Black Country, and as far as the Beetham Tower in Manchester, Winter Hill in Lancashire and Cleeve Hill in Gloucestershire.

View towards the Wrekin

The name of the hill is ancient, predating the Roman occupation. It is from the early British language, its name reconstructed as Wrikon[2] or Uriconio. It is presumed to have given a name to the Roman town of Viroconium (in full Viroconium Cornoviorum or 'Viroconium of the Cornovii'), and hence to modern Wroxeter which stands in that location. Some have connected the same name to another Cornovian town, Wrexham (named in a charter of 1236 as Wrectesham).[3]

In English, the Mercian 'Tribal Hidage' includes an entry for the people recorded as 'Wocensæte, presumed to be in fact Wrocensæte, and in a charter of 855 found in the Worcester cartulary it is spelled Wreocensetun, meaning "Wrekin-dwellers", whose lands encompassed much of today's Shropshire, perhaps all of it. The kingdom of the Wreocensæte was a minor kingdom in the area under Mercian overlordship, and whether of English or British or mixed blood is unknown. It preserved however a much older name.

The hill has given a name to a geological type, the Uriconian series of rocks.

For several centuries the hill was known also as 'Mount Gilbert', a name given to it by the Normans after a hermit who lived there. 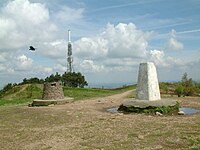 The summit of The Wrekin

View from the Wrekin

There is an Iron Age hill fort on the summit almost 20 acres in size. Local tradition claims the hill as the capital of the Cornovii tribe.

A more recent addition is The Wrekin transmitting station, used for broadcasting and telecommunications. At the top of the main mast is a beacon which emits a red pulse of light every few seconds at night. A beacon was originally erected on the Wrekin during Second World War, however in the years after the war this fell into disrepair. The current beacon was erected in the year 2000 to celebrate the Millennium, the beacon serves no actual purpose and it is a common misconception that it is used to alert low flying aircraft. It is known locally as the "Wrekin Beacon", and is visible for many miles around.

The geology of The Wrekin and its immediate area is complex, consisting of a variety of rocks of a range of ages affected by numerous faults. The crest of The Wrekin's ridge and its northwestern slopes are formed from various rocks of volcanic origin assigned to the Uriconian series, of Precambrian age. The 'Uriconian Volcanics' include rhyolites, tuffs and agglomerates. These rocks – layers of ancient lava flows laid down in a volcanic island arc, similar to modern Japan – are approximately 680 million years old.[4]

Dolerite dykes intruded the extrusive volcanic rocks around 563 million years ago. A variety of the intrusive igneous rock granophyre, known as Ercallite forms the northeastern shoulder of The Ercall. It was put in place around 560 million years ago and is overlain by Cambrian rocks of sedimentary origin.[5] The southeastern side of the ridge is largely formed from sandstones and shales of Cambrian age. They include the early Cambrian Lower Comley Sandstone and Lower Comley Limestones together with the Wrekin Quartzite, outcrops of which also occur to the northwest of the ridge.

The lower ground to the northwest comprises sandstones and mudstones of late Carboniferous and Permian age whilst to the southeast are a succession of rocks of early Carboniferous age including limestone, the Little Wenlock Basalt and the Lydebrook Sandstone.[6]

Structurally, the Wrekin together with the Ercall forms part of the Church Stretton Complex where different geological terranes meet. The Cymru Terrane is to the west with the Wrekin Terrane to the east of the fault system. The fault system trends north-northeast:south-southwest and the line carries on through other geologically important exposures such as those in the area of Caer Caradoc.

Though of volcanic origin, the Wrekin has never been a volcano in its own right; instead it is composed mainly of volcanic rocks and is a product of volcanism.[7] Its modern shape, which from certain viewpoints appears to resemble a volcano, has been formed by other natural processes.

The Wrekin can be accessed from the final junction on the M54 motorway (J7) before it turns into the A5 which continues to Shrewsbury. The hill is then signposted.

There is a well-used footpath up the side of the hill which has an entrance at the end of the road off the M54. There is also a small car park and parking bays up the road. Between the Ercall and the Wrekin is a well positioned car park, at Forest Glen, allowing easy access to both areas. The ascent is steep in parts.

The Wrekin is the subject of a well-known legend in Shropshire folklore. One version of the story runs as follows:[8]

A giant called Gwendol Wrekin ap Shenkin ap Mynyddmawr with a grudge against the town of Shrewsbury decided to flood the town and kill all its inhabitants. So he collected a giant-sized spadeful of earth and set off towards the town. When in the vicinity of Wellington he met a cobbler returning from Shrewsbury market with a large sackful of shoes for repair. The giant asked him for directions, adding that he was going to dump his spadeful of earth in the River Severn and flood the town. "It's a very long way to Shrewsbury," replied the quick-thinking shoemaker. "Look at all these shoes I've worn out walking back from there!" The giant immediately decided to abandon his enterprise and dumped the earth on the ground beside him, where it became the Wrekin. The giant also scraped the mud off his boots, which became the smaller hill Ercall Hill nearby.

In 1981 an event was undertaken by local school pupils and adults called "Hands around the Wrekin", whereby a large group of people all held hands, surrounding the hill at the base.

The Wrekin has a cheese named after it called Wrekin White that is produced and sold in a dairy in Newport, Shropshire

View to the west from the top of the Wrekin

There is an old local claim, supported by a summit toposcope, that there is a line of sight to Snowdon, but the line is blocked by Cadair Berwyn.