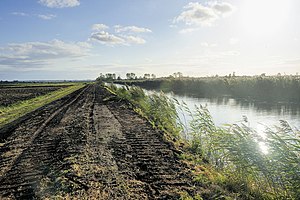 The Raveleys are two Huntingdonshire hamlets; Great Raveley and Little Raveley. Each is but a small group of cottages at the fen edge.

The two villages lie near Upwood, and 3½ miles southwest of Ramsey. The villages are both south along the lane from Upwood and socially and ecclesiastically dependent on it.

A few houses along the lane, Great Raveley stands to the south of Upwood and north of Little Raveley. It retains some buildings of 17th century, including the Manor House and the former Three Horseshoes Inn, now a private dwelling. A number of 17th-century half-timbered cottages stand too. There is no church in this tiny village.

The village is built along a branch road to Wood Walton. The Manor House is at the southeast end on the top of the hill, such as it is. Lower down are the Methodist Chapel and the school. At White House Farm, at the west end of the village, is an ancient barn. A short distance north-west of this farm is a square homestead moat within which stood the ancient manor house of Moyne's Manor.

Great Raveley has been recorded in the past as:

The farmland around Great Raveley is mostly clay land, rising from Great Raveley Fen in the north, just 3 feet 6 inches above sea level, to 129 feet at Top Road. The greater part of this land is high ground where wheat and beans are grown; the pasture land covers less than a third of the area. There are some 32 acres of woodland.

Little Raveley stands to the south of Great Raveley. It had in past days a small church of the Perpendicular period, which still stands but which now serves as a private residence.

The even smaller village of Little Raveley did have a correspondingly small church, the Church of St James, which has an Early English chancel and a 15th-century nave. The church has closed and the building is now used as a private residence.

The village lies on the winding road from Broughton to Great Raveley at a point where a branch road goes westward to Wennington and Abbots Ripton.

It consists only of the church, which is in the north-west angle formed by these roads, and some four farm houses, four cottages and four county council houses, the population in 1921 being only 45 persons. The village has been recorded in the past as:

The farmland of Little Raveley is arable land, mainly clay. The land is fairly level, being for the greater part a little more than 100 feet above sea level.

It is thought that St James' Church, Little Raveley, was built in about 1230 with the nave being rebuilt in the late 14th Century when it was widened. Restoration work was carried out on the chancel in 1914 and, in 1975 the church was de-consecrated, becoming a private house.

Little Raveley was a chapelry subordinate to Wistow, apparently until Wistow obtained parochial rights in 1351, when it was directly dependent upon Bury; it is uncertain when this was.

The living was in the gift of the lord of the manor. In the Parliamentary Survey of 1649, Little Raveley is said to be a chapelry of Bury and a donative worth £12 a year, and that Great Raveley, lying within a quarter of a mile, having neither church nor chapel, was very convenient to be joined to Little Raveley, but this proposal was not carried out. About 1867 Lord Sandwich, as lord of the manor, relinquished his right to the donative and the living became a vicarage in his patronage.

Raveley Wood, within the parish, and Wennington Wood, just outside in Abbots Ripton parish, form a considerable stretch of woodland along the southwest border.