Templemore is a town and parish in the North Riding of County Tipperary. The civil parish forms part of the barony of Eliogarty.[1] The town is part of the Ecclesiastical parish of Templemore, Clonmore and Killea in the Roman Catholic Archdiocese of Cashel and Emly.

To the east, the R433 connects the town to the M8 at a more northerly point (Junction 3) via the villages of Clonmore, Errill and the town of Rathdowney in County Laois. Alternatively, the motorway may be accessed via the village of Templetuohy. To the west, the R501, tracking the Devil's Bit mountain range, goes to Borrisoleigh.

Templemore railway station is on the Dublin-Cork railway line. There are direct trains to and from stations including Dublin Heuston, Thurles, Cork and Limerick[2]

The ancient territory of Éile obtained its name from pre-historic inhabitants called the Eli, about whom little is known beyond what may be gathered from legends and traditions. The extent of Éile varied throughout the centuries with the rise and fall of the tribes in occupation. Before the 5th century AD the details of its history which can be gleaned from surviving records and literature are exceedingly meagre, obscure and confusing. During this century however Éile appears to have reached its greatest extent, stretching from Croghan Bri Eli (Croghan Hill in Offaly) to just south of Cashel (in Corca Eathrach Eli). The southern part of this territory embraced the baronies of Eliogarty and Ikerrin, a great part of the modern barony of Middle Third, the territory of Ileagh (or Ileigh) and a portion of the present barony of Kilnamanagh Upper.

By the 8th century, the territory of Ancient Éile had broken up into a number of petty kingdoms: the O'Carroll occupied the northern portion, the O'Spillanes held Ileagh, the Eóganacht Chaisil had annexed Middle Third. The ancient name of the district on which the town now stands was Tuatha Corca Teine. Teine was supposed to have been the son of the King of Connaught, arriving in the district shortly after Saint Patrick. Monastic settlements were located at the site of Teine's fort, Land of the Monks. A holy man named Silean (Anglicised as Sheelan) is reputed to have accompanied St Patrick and to have established a monastery in the area. The townland on which the town is built is Kiltillane, meaning Saint Sheelan's Church. 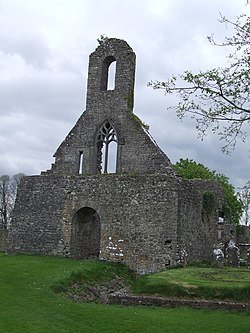 With the Norman invasion of Ireland in 1169, a powerful Norman family – the Butlers – became the new overlords. Early in the 14th century, they were raised to the Earldom of Ormond. As the holders of the County Palatine of Tipperary, they were entitled to appoint sheriffs and judges, and to gather certain classes of revenue that would normally have been due to the Crown. This privilege was withdrawn in 1715. The family donated a small piece of land to the Abbey of St Thomas in Dublin, and about 1200 a large Abbey was built with a moated graveyard, the remains of which are still to be seen in Templemore Demesne, commonly known as the "Town Park".

The Blackcastle, as it is locally known, was built in the Town Park in 1450 by James Butler, 4th Earl of Ormond.[3] This building and its manor lands were occupied by the Butlers and were later leased to the families of Purcell of Loughmore (Loughmoe) and Morris of Knockagh.

The O'Fogarty clan held what is now the barony of Eliogarty, while to the north of them, at least some time later, were O'Meaghers of Ikerrin.[4] The River Nore, at its position between Roscrea and Templemore, although just a small stream at this point, is usually taken as the southern limit of Ely O'Carroll territory. 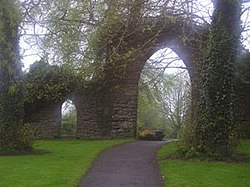 Black Castle Town Park 2007
Around 1695 the Butlers sold extensive lands to a family called Carden[5] from Cheshire, who settled in the area and also located at Barnane and Fishmoyne. Over the next 200 years, this family was to play a significant part in the development of the town and district which has the nickname of "Carden's Wild Demesne", after the popular 19th century poem.

Templemore owes its improved state to the liberality and exertions of the John C. Carden, Bart. under whose auspices the public buildings were erected, and by whom the ground on which the town stands was granted at a nominal annual rent.[6]

Following the burning of the Blackcastle, Carden built a new estate. He built a mansion known as the Priory on the edge of the town. The architecture of the Priory was in the style of the Elizabethan era. The Priory was surrounded by a demesne which had a formal garden with paved paths around an artificial lake. Quoting from a contemporary newspaper commentary of 1861, when the Priory was still under construction:

The noble Gothic pile of finely chiselled limestone, with its battlements, turrets, buttresses and extensive façade, and spacious arched doorway; the architraves of grouped columns, retreating to the depth of several feet, convey to the mind an idea of architectural grandeur seldom associated with the country residences of our gentry.

There were extensive gardens and a lot of money was spent on them: {{quote|The house itself consists of sixty rooms, and the sum of, we understand £20,000 in round numbers, has been expended so far upon the building, – Upon entering the grand hall, through the massive oaken doorway, replete with medieval decorations, the visitor finds that ‘The Priory’ has been erected in a style of magnificence not very generally met with – it is floored en mosaique, in walnut and oak; the peculiar grotesque spirit of the Gothic style is not permitted to run riot through the rich oak carving, while that more beautiful element, tracery enters largely into the interior ornamentation – the oak painted ceiling richly stuccoed and the polished armour shields an banners that hang around with the erect figures in full suits of armour; the wide staircase in massive oak – the great doorways leading to the drawing–room at one side and to the library at the other – the rich and mellow light that comes through the beautiful stained glass window that forms the upper portion of the Gothic entrance, and through the lancet shaped sashes – all this bespeak a profuse liberality and taste of order.

The Cardens kept the ruins of the old church and graveyard. At the entrance on the Borrisoleigh Road is the gatekeeper's lodge. After 1860, the Priory was renamed the Abbey.

Lewis' directory of 1837 lists the principal landowners in the locality at the time:

Lloydsborough is the seat of J. Lloyd, Esq.; part of the demesne is in Killea, though the mansion is in the parish of Templemore; it is a handsome residence in a well-planted demesne. The other principal seats are Woodville Lodge, the residence of D. J. Webb, Esq.; Belleville, of the Hon. C.J.K. Monck; and Eastwood, of T. Bennett, Esq.[7]

McCan Barracks, originally called "Richmond barracks", was constructed in 1809 on the 17-acre site donated by the town's founder and largest landowner Sir John Carden, ancestor of Sir John Carden, 6th Baronet (1892-1935), who also donated the adjoining 40 acres for training and recreation. It replaced an earlier barracks located near the Ursuline convent. George Borrow resided there when he accompanied his father's regiment to Templemore in 1816. The new barracks consisted of 2 squares, surrounded by company lines, stores, married quarters, officer's mess, military prison, church and hospital. Completely surrounded by a high wall, with protective/defensive posts at each corner, it had accommodation for 25 officers, married quarters for 48 other ranks, and 767 unmarried personnel. A total of 36 hospital beds and 15 guardroom cells were located within the complex as well as stabling for 27 officers' horses. The surrounding area was quickly developed, with names such as Talavera Place, Vimeiro Mall and Regent Bridge,[8] reminders of the victories of the British in the Peninsular War taking place at the time of the construction of the barracks.[9]

Since February 1964, the barracks has been the site of the Garda Síochána College, the centre for training Ireland's police force.[10] 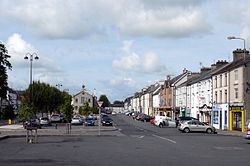 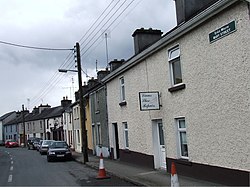 The most notable landmark in the district is the Devil's Bit mountain range. It is a popular excursion for people to visit the Rock and cross at the summit. Following the War of Independence, the private demesne of the Carden family came into the ownership of the town's urban district council which handed it over to the citizens as the Town Park. The Park incorporates an outdoor Swimming Pool, GAA grounds (Páirc Shíleáin), Lakeside Pitch & Putt Course and an all-weather athletic track in the care of Templemore Athletic Club. The demesne's mature woodlands features walks, the romantic ruin of the Black Castle on the western bank of the lake and the ruin of the eponymous big church. The main focus of attention is the man-made lake (7½ acres) which is suitable for coarse fishing.

On the Roscrea road there is a cluster of buildings associated with the Church of Ireland community. The most significant of these is St Mary's Church, which is the principal church serving the community in Templemore, Thurles and Kilfithmone.[11] The church originally stood in front of one of the entrances to the Abbey's parkland. When the estates locally known as The Park were built in the late 1950s, the entrance gates and avenue were removed by the town council. The church, along with St Mary's School, the Rectory, adjacent cottage and lodge, were built in 1789 on land donated by Sir John Craven Carden. It was consecrated by the Archbishop of Cashel, Charles Agar, in 1794. The clock tower is now restored and is floodlit as part of a millennium project.

The foundation stone for the parish church, the Church of the Sacred Heart, was laid on 1 January 1877. It stands on the site of the former residential Erasmus Smith school. At the nearby village of Loughmore is the historic Loughmoe Castle. The local area is quite scenic and there are expansive views from the Devil's Bit mountain close by.

The market square with its Town Hall in the centre of the town is reputed locally to be the widest in either Ireland or Britain. It backs on to an extensive wooded Town Park and lake. The Georgian architecture (dating from the 19th century) with its three-storey houses on the main street, was directed by Sir John Carden (2nd Baronet, Templemore).

Templemore was one of the first three locations selected by the trust of Erasmus Smith in the 17th century for his schools.[12] Today's schools include:

The local Gaelic Athletic Association club is J.K. Bracken's GAC, formed in 1991 when clubs from Clonmore, Killea and Templemore merged. It is named for Joseph Kevin Bracken, one of the founders of the GAA,[14] who came from Templemore. His son, Brendan, who was a member of Winston Churchill's government in the United Kingdom during World War II, was born in Templemore.[15]

There is a nine-hole golf course located at close to the Garda Síochána College just off the Thurles road. The Lakeside Pitch-and-Putt club is located beside the lake in the Town Park. Its eighteen-hole course is affiliated to the Pitch and Putt Union of Ireland.

Coarse fishing is available in the lake in the town park. The lake was recently restored after a period of pollution and rising phosphates. It now boasts a healthy stock of native fish, as well as a scenic fountain.