Sutton-in-the-Isle, commonly referred to simply as Sutton, is a village in the Isle of Ely, the norethern part of Cambridgeshire. It stands near the city of Ely, amongst the Great Fen.

The village location on high ground of the Isle of Ely provides commanding views across the surrounding low lying Fens.

The village was mentioned in the Domesday Book of 1086, named as Sudtone. There were then 9 sokemen, 8 villeins (each with 7.5 acres), 15 cotters and 7 serfs. In 1109 the charter 51 of Bishop Hervey included Suttune in the lands laid down as conferred upon the Cathedral Priory of Ely.

The vicarage of St Andrew's was instituted in 1254. The Prior's Manor of Sutton was established in 1292, according to the Ely Diocesan Registry. During the 1300s, Reginald de Beringhale of Sutton became a major landowner, following on from his father's period of empire-building. In 1312 Sutton was authorised to hold a street market each Thursday which was held on the wider part of the High Street outside what is now the One Stop Shop.

The building of the parish church, dedicated to St. Andrew, was started between 1350 and 1360 and substantially completed by 1370. It has a distinctively shaped tower that often described as being the shape of a pepperpot. Numerous non-conformist chapels have also existed in the village, including a Methodist chapel constructed in 1790 after a visit by John Wesley in 1774 and a Baptist chapel constructed in the same century. Both of these closed in the last decade, leaving St Andrew's as the sole church in Sutton. A school was first established in 1579 under William Heye, and in 1599 the village became known as “Golden Sutton”, as it was so prosperous. By 1800 it had a population of about 950 growing to 1,862 by 1851 and in 1860 the first purpose built school opened with John Taylor as the first headmaster and his wife as headmistress, and continues to expand to serve the village's growing population.

A railway station was opened in 1866 with the first Great Eastern Railway passenger train services to Ely on 16 April 1866. The railway line was later extended round the edge of the fen to Earith Bridge and onto St Ives, Huntingdonshire, opening on 11 May 1878. The line to St Ives was closed on 6 October 1958, followed by the line to Ely on 13 July 1964 as part of the Beeching Axe.

In 1941, due to Second World War, Mepal Airfield was constructed between the villages of Sutton and Mepal. During the 1960s, Sutton Gault was host to a one-mile section of one of the world's first Tracked Hovercraft designed by Eric Laithwaite. This used air-cushion train tracks and a linear induction motor for propulsion and ran alongside the Old Bedford River.

The village was bypassed in 1984 and a straw burning power station opened in 1996.

The village has had a variety of businesses throughout its history. For example, it was once well known for its fruit growing, has produced cheese and manufactured road sweepers. It also continues to host a monthly auction of construction and agricultural equipment that is the largest of its kind in Europe. 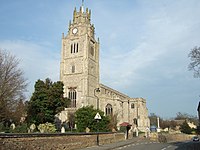 Currently the village has a One Stop shop, a pharmacy, two hairdressers, an Indian restaurant and take-away, a Chinese take-away and chip shop, a pub "Chequers", a family run garage and a motor repair centre. There is also a GP surgery. Planning permission has been given for a shop at the garage in Ely Road. There is also a proposal to re-open the old butcher's shop in the High Street as a deli.[1]

Bus services link the village to Ely and Cambridge to the south and March to the north with an hourly service during the daytime but no service in the evenings or on a Sunday.

The Glebe community centre provides a range of meeting rooms used by local community groups as well as being used for private hires such as wedding receptions. It is also the location of the Parish Office which is open between 10am and 12 noon Monday to Thursday. The Community Room is located adjacent to the school and provides an additional meeting room used by a number of local groups including a monthly community cafe.

The village has a cricket club with its own grounds and cricket pavilion. Adjacent to the Brooklands Centre off the Brook, the Parish Council provides playing fields, a multi-use games area and a sports pavilion used by local football teams and other local sports groups. The village bowls club green is also next to the sports pavilion. The pavilion also hosts a weekly pensioners' lunch club. In nearby Stirling Way the Parish Council provides a children's play area. Elsewhere on the south side of the village is the Recreation Ground, previously used for organised sporting events but now used as an informal recreation and dog walking area. 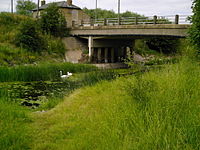 Bridge over the Old Bedford River at Sutton Gault

Sutton Gault (Bury Lane) is a part of the parish of Sutton-in-the-Isle. The name derives from the gault clay that has been extracted from there. It comprises a few houses and farms, a guest home, "Grove Barn" and an inn, "The Anchor". The Old Bedford River and New Bedford River pass through Sutton Gault. The land between them, known as the Ouse Washes, often floods and forms part of an internationally important wetland habitat.

The Americas, also known as The America or just America is another part of the parish. Although it is treated as a separate settlement from the village of Sutton-in-the-Isle on some maps, most residents consider it part of the village and the equivalent of a street name. So far the origins of the name remain a mystery. It is known to have had its name since at least 1881 as it is mentioned in the census of that year, although the name could be much older.