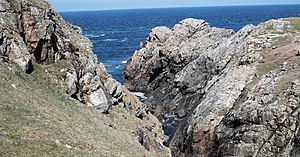 Strathy Point is a peninsula on the north coast of Sutherland, and the headland at its tip. It extends north from the village of Strathy (on the north coast road) to a sharp point beyond the hamlet of Totegan. A single lane runs due north from Strathy up the peninsula to Totegan, and continues as a track to the point itself, where stands the Strathy Point Lighthouse, now deactivated and owned privately.

The point is the northernmost point of the Sutherland coast until Durness and Cape Wrath in the west.

At the root of the peninsula, on each side are small sandy bays; Strathy Bay on the east side and Armadale Bay on the west.