Stranraer is a port town in Wigtownshire.

Stranraer lies on the shores of Loch Ryan on the northern side of the isthmus joining the Rhins of Galloway to the mainland. The name is generally believed to come from the Gaelic An t-Sròn Reamhar meaning "The Fat Nose" but which more prosaically might be rendered as "the broad headland", possibly from Galloway Gaelic or Ulster Gaelic. Another interpretation would link the second element in the name with Rerigonium, a settlement anciently noted by Ptolemy in this part of Britain.

Stranraer is best known as having been a ferry port connecting Galloway with Belfast. The service to Larne was transferred to Cairnryan in November 2011.[1]

The original part of town is that down by the lochside, including Sheuchan Street and Agnew Crescent, known locally as the Clayhole or, in local dialect Cl'yhole, and a man from that part of town is a "Clayholer".

Stranraer became a burgh of barony in 1596 and a royal burgh in 1617. By 1600, it had become the market town for western Wigtownshire. At about this time Stranraer was reached by a military road built from Dumfries to allow easier access to Portpatrick for transport to Ireland.

The first harbour in Stranraer was built in the mid-18th century, with further port development in the 1820s. The arrival of the railway from Dumfries in 1861 finally established Stranraer as the area's main port. In 1862, the line was extended to serve the harbour directly, and a link to Portpatrick was also opened. Some time later, a rail connection north to Girvan was established.

Stranraer remained the main Scottish port for the Irish ferries for the next 150 years or so.

Stranraer and its surrounding area saw a significant amount of activity during the Second World War, as it became a focus for anti U-boat work. Flying boats operated from the area in an attempt to secure the waters of the North Channel and the south western coast of Scotland. Almost all of Britain's shipping imports passed through those two sea areas on their way to the Cyde or the Mersey. Indeed, the flying boat Supermarine Stranraer is named after the town. Winston Churchill himself departed from Stranraer in a Boeing Flying Boat on the night of the 25 June 1942, when making his second visit of the war to the United States. Churchill also spent time at nearby Knockinaam Lodge during the war years.

On 31 January 1953, 133 people died when the Princess Victoria out if Stranraer sank near Belfast Lough after its car deck was swamped by heavy seas.

Stranraer has an active local history trust which publishes work on the area's history commissioned from local authors.

The Castle of St John is a mediæval tower house, built around 1500 by the Adairs of Kilhilt. It has been used as a home, a court, a prison, and a military garrison, the latter during the Killing Times in the 1680s.

The Old Town Hall was built in 1776 and now houses Stranraer Museum with its displays of Victorian Wigtownshire and the town's polar explorers, Sir John Ross and his nephew James Clark Ross.

The town is also home to the North West Castle, built in 1820 and with its own indoor curling ice rink.[2]

George Street, at the heart of the old quarter of town 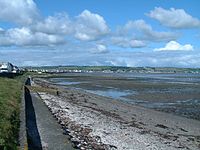 Stranraer and the shores of Loch Ryan, as seen from the north-eastern end of the town

Stranraer is the largest town in Wigtownshire and indeed the biggest in Galloway. With the surrounding area, it counts a population of nearly 13,000. It is currently undergoing redevelopment in the South Central Area (known as Dick's Hill, Ochtrelure and the southern part of Liddesdale Road area into the Gallow Hill).

The town is divided into districts:

At an estimated cost of £1.29m, the ‘Castle Square’ development will be the first phase of the redevelopment of Stranraer town centre and significantly change the flow of traffic with Castle Street and George Street both being narrowed in a bid to be more pedestrian friendly.[3]

The Castle Square was formally unveiled in early Spring and has so far hosted a range of activities, including music and family events.

The main industries in the area are the ferry port, with associated industries, tourism and more traditionally farming. The Caledonian Cheese Company operates a large creamery in the town which supports a large number of jobs. Stranraer is the home to Seriously Strong Cheese. 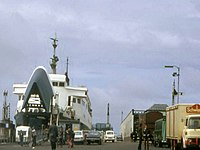 Stranraer railway station is the southern terminus for one of the branch lines of the Glasgow South Western Line. Trains go daily to Ayr, Glasgow, and Kilmarnock. The trains connect with the ferry to Belfast.

In November 2011 Stena Line relocated its ferry services to a new port at Old House Point, north of Cairnryan. It is hoped that the existing port in Stranraer will be redeveloped with the departure of Stena Line, with proposals to build a transport hub having been drawn up.

The nearest Airport to Stranraer is Belfast City Airport, 30 miles away which is only accessible by ferry. The nearest airport this side of the sea is Glasgow Prestwick.[4]

James Barton, one of the visionaey engineers of the later Victorian period, dreamed of a rail tunnel across the North Channel from Wigtownshire to Antrim. He published a paper about the project to the International Engineering Congress in Glasgow in September 1901, estimating the cost at £10,000,000.

For distance the North Channel is no undefeatable challenge, the Channel Tunnel from Kent is longer, but depth and geology stand against it. Instead, Barton proposed a floating tunnel which would have been anchored at Whitehead on Island Magee and at Portpatrick on the Rhinns of Galloway and sunk just deep enough to keep it away from tide and storm. A few weeks after Barton's paper was published, Lord Rosebery alluded to it with favour in a speech in Stranraer. It was never however attempted. The idea does not however go away.

Also at Stair Park are BMX and skateboarding ramps, and all-weather tennis and netball courts. The town also has a swimming pool (with flume), fitness suite, gymnasium and large sports hall at the council-run Ryan Centre, as well as other football fields, parks and all-weather multi-purpose pitches.

Throughout the years, Stranraer has also become a centre of excellence for Scottish curling. The town boasts the first hotel in the world with an indoor curling ice rink (North West Castle), and was the birthplace of Hammy McMillan, a World Champion curler, who continues to live in the town today. The town is host to a number of annual curling championships, including the Scottish Ladies' Curling Championship and the World Juniors Curling Championship.

There is also an amateur Boxing club and amateur Kickboxing club currently active in Stranraer.

A small leisure boat marina was constructed in Stranraer Harbour in 2008.