Stornoway is a town and burgh of Ross-shire on the Isle of Lewis, in the Outer Hebrides.

Stornoway is the only true town of the Outer Hebrides. Its population of around 9,000 makes it far and away the largest settlement in the islands, containing a third of their population. The civil parish of Stornoway, including various nearby villages, has a population of approximately 12,000.[1]

Stornoway is an important port and the major town and administrative centre of the Outer Hebrides. It is home to Comhairle nan Eilean Siar (the Western Isles Council) and a variety of educational, sporting and media establishments.

As in the rest of Lewis, strict observance of the Sabbath is maintained by the townsfolk.

The name Stornoway is derived from the Old Norse language of its founders. The name Stjórnavágr means 'steering bay'.

On roadsigns in Lewis, the Gaelic name alone appears, Steòrnabhagh, which is likewise simply a rendering of the Norse Stjórnavágr. 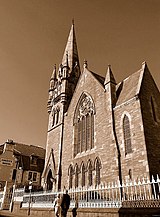 Stornoway is a stronghold of the Free Church of Scotland. The Sabbath is still widely observed in Stornoway. It is home to a number of members of the Lord's Day Observance Society, which promotes Sabbath observance with no work on a Sunday. Sunday newspapers are not available and almost all shops and local amenities are closed on Sundays.

Churches in Stornaway include:

Stornoway is believed to have been founded by Norwegian seamen and settlers and developed around its well sheltered natural harbour.

Mediæval development of the town was spurred by the construction of the original castle in the High Middle Ages by the Nicolson (or MacNicol) family, themselves of Norse descent. Infighting between rival clans continued throughout the Late Middle Ages and resisted an attempt by the then King of Scotland, James VI to colonise Lewis in 1597 with the "Fife Adventurers".

The castle was destroyed by Oliver Cromwell's forces in the aftermath of his Scottish campaign in the mid 17th century, and the ownership of Stornoway and by extension the Isle of Lewis passed from the MacKenzies of Kintail to the Seaforth family. Later it came to Sir James Matheson and his descendants and in the twentieth century passed to the soap tycoon William Lever, 1st Viscount Leverhulme. Lord Leverhulme finally gave the town's parish to the Stornoway Trust, in whose ownership remains to this day.

On 1 January 1919, the Iolaire sank at the entrance of the harbour, one of the worst maritime disasters in British waters, in which 200 men died.

Today the harbour hosts a fishing fleet (and associated shoreside services) somewhat reduced from its heyday, a small marina and moorings for pleasure craft, a small shipyard and slipway, three larger piers for commercial traffic and Stornoway Lifeboat Station, run by the RNLI and home to a Severn class lifeboat, Tom Sanderson. Her Majesty's Coastguard operates a Maritime Rescue Sub Centre from a building near the harbour.

A lighthouse, seaweed processing plant and a renewable energy manufacturing yard are situated on Arnish Point at the mouth of the harbour and visually dominate the approaches. Arnish Point is also earmarked by AMEC as the landfall for its proposed private sub-sea cable which would export the electricity generated from a proposed Lewis Windpower wind farm.

The Arnish area was also surveyed by Scottish and Southern Energy plc for a sub-sea cable but lost out in favour of Gravir to the south as the preferred site.

The manufacturing yard was originally established in the 1970s as a fabrication plant for the oil industry but suffered regular boom and bust cycles. The downturn in business from the North Sea oil industry in recent years led to a move away from serving this market. The yard is now earmarked as a key business in the development of the whole Arnish Point industrial estate and has received large amounts of funding in recent years.

In 2007 the Arnish yard suffered the failure of several tenants but in December 2007 yard won a contract to construct 49 towers for wind turbines in Turkey over the next year.

A Caledonian MacBrayne ferry, the Isle of Lewis, sails from the harbour to Ullapool in Cromartyshire, a journey of taking 2 hours 45 minutes in good weather and a second ship (MV Muirneag provides a single early morning sailing to carry most of the island's freight lorries. A decision by CalMac to sail on the Sabbath too caused disquiet and protest on the island.

Suggestions for the possibility of an undersea tunnel linking Lewis and Harris to the Scottish mainland were raised in early 2007. One of the possible routes, between Stornoway and Ullapool, would be over 40 miles long and hence become the longest road tunnel in the world.[2][3]

Stornoway is also the public transport hub of Lewis, and bus services provides links to Point, Ness, Back and Tolsta, Uig, the West Side, Lochs and Tarbert, Harris. These services are provided by the Comhairle and several private operators as well as some community-run organisations.

Stornoway Airport is next to the village of Melbost, two miles away from the town itself. From here services operate to Aberdeen, Benbecula, Edinburgh, Inverness and Glasgow. The airport is also the base of a HM Coastguard Search & Rescue Sikorsky S-92 helicopter, and was previously home to RAF Stornoway.

In 1898, the Hebridean Light Railway Company was proposed, with a terminus at Stornoway, but the line was never constructed.

North from Stornoway is a road leading to Tolsta. It then continues a while and leads to a large, confident bridge which crosses the steep gorge above Garry Beach. The road stops and continues as a track for just a short distance. The bridge was a link in Lord Leverhulme's plan to drive a road along the unsullied north of Lewis's east coast to Ness. The "Bridge to Nowhere" is a popular evening's jaunt from the town, for those who care to brave the midges.

The village of Tong about 2 miles from Stornoway plays host to the local Highland Games and the Western Isles Strongest Man competition each summer. 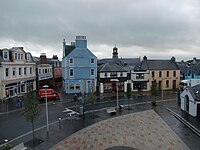 The annual Hebridean Celtic Festival is a 4-day community led festival which attracts over 10,000 visitors during July of each year. The Royal National Mod has been held in Stornoway on a number of occasions, most recently in 2001 and 2005. Large influxes of visitors such as for these events can strain the town's accommodation capacity.

The Stornoway black pudding is regarded by some as one of the top gourmet black puddings in the United Kingdom.[4]

Stornoway Kippers and Stornoway smoked salmon are still produced in the town. They have one of the last working brick kilns in the United Kingdom, which can be found at the establishment of Stornoway Fish Smokers, Shell Street.

The famous guga, the flesh of the young gannet, is now available only from those landed each year from Sula Sgeir at Ness in the north of Lewis. 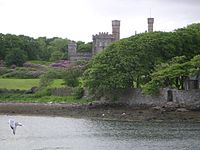 Notable buildings in Stornoway include:

An Lanntair, is an arts centre containing an art gallery, auditorium for film showings, music and other performances, a restaurant and bar.

The Stornoway Way by Lewisman Kevin MacNeil is a cult novel largely set in Stornoway.