Stoke Poges is a scattered village and parish in southern Buckinghamshire. It is centred approximately three miles north of Slough, its post town, and a mile east of Farnham Common.

In the name Stoke Poges, stoke means "stockaded (place)" that is staked with more than just boundary-marking stakes. In the Domesday Book of 1086, the village was recorded as Stoche. William Fitz-Ansculf, who held the manor in 1086 (in the grounds of which the Norman parish church was built), later became known as William Stoches or William of Stoke. Two hundred years after William, Amicia of Stoke, heiress to the manor, married Robert Pogeys, Knight of the Shire, and the village eventually became known as Stoke Poges. The spelling appearing as "Stoke Pocheys", if applicable to this village, may suggest the pronunciation of the second part to have a slightly more open "o" sound compared with the word "Stoke".[1]

A manor house at Stoke Poges was built before the Norman Conquest and was mentioned in the 1086 Domesday Book. In 1555 the then-owner, Francis Hastings, 2nd Earl of Huntingdon, pulled down much of the existing fortified house. He replaced it with a large Tudor brick-built house, with numerous chimneys and gables. In 1599 it was acquired by Sir Edward Coke, who is said to have entertained Queen Elizabeth I there in 1601.

A few decades later, the married lady of the manor, Lady Purbeck, had a love affair with Robert Howard, a Member of Parliament. The affair's discovery was received as a scandal upon the three people involved, and in 1635 Lady Purbeck was imprisoned for adultery. She escaped from prison to France, but later returned to Stoke Poges, where she died in 1645.

King Charles I was imprisoned at the manor house in 1647 before his execution.

Later the manor came into the possession of Thomas Penn, a son of William Penn who founded Pennsylvania and was its first proprietor. Thomas Penn held three-fourths of the proprietorship. The manor property remained in his family for at least two generations, as his son John Penn "of Stoke" also lived there.

Thomas Gray's 1750 poem, "A Long Story," describes the house and its occupants.[2] Sir Edwin Henry Landseer was a frequent visitor to the house and rented it as a studio for some time. His most famous painting, The Monarch of the Glen (1851), is said to have been created at Stoke Poges, with the deer in the park used as models.

Gray's "Elegy Written in a Country Churchyard" is believed to have been written in the churchyard of the Church of England parish church of Saint Giles in Stoke Poges. Other churches have claimed the honor, including Everdon, Northamptonshire. 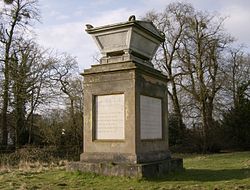 Gray is buried at St Giles. John Penn of Stoke had built a large monument displaying the Elegy nearby.

The Georgian rectory was built by Thomas Penn of Stoke Park in 1765. It is now a private residence called Elegy House.

In film, fiction and the media