This strategic position was first remarked upon by Tacitus[1] and has placed Stirlingshire in the heart of many dramatic and indeed bloody episodes of British history, in those long ages when war was known in these lands.

Stirlingshire is in the midst of Scotland, in the pinch between the Clyde and the Forth, between the Highlands and the Lowland. It is bounded to the north by Perthshire; to the north-east by Clackmannanshire and the Firth of Forth; to the south-east by West Lothian; and to the south by Lanarkshire and the detached part of Dunbartonshire. To the west and south-west it is bounded by Dunbartonshire proper. The county has two detached parts: one found within the parish of Logie, surrounded by Perthshire; the other formed by the ancient parish of Alva, taking a sizeable chunk out of Clackmannanshire.

Stirlingshire, standing at the border of Highland and Lowland, has itself examples of both. The highest point of the county is the summit of Ben Lomond, which rises to 3,196 feet above sea level.

In the north-west of the county is a spur of the Grampian Mountains, the spur culminates in the Arrochar Alps, and their summit, Ben Lomond.

The centre of Stirlingshire is occupied by a group of more modest hills known as the Lennox Hills, consisting of the:

In Stirling itself is a great volcanic plug, Castle Hill, surrounded on three sides by steep cliffs, and on which stands Stirling Castle, guarding what was once the lowest bridgeable point on the River Forth. Geologically, Castle Hill is an intrusive crag which forms part of the Stirling Sill.

The chief river of Stirlingshire is:

The other important rivers are:

The principal lochs include:

The Forth and Clyde Canal crosses the south-eastern corner of the county from Grangemouth to Castlecary.

The oldest rocks in the county are the Dalradian schists which occupy the north-west beyond a great fault which runs across from near the bottom end of Loch Lomond in a north-easterly direction passing not far from Aberfoyle. These schists are less altered and micaceous near the fault and there is some evidence for believing them to be of Ordovician age. On the south-eastern side of the fault are the conglomerates and sandstones of Lower Old Red Sandstone age, more highly inclined and coarser nearer the fault. Resting uniformly on the lower series is the Upper Old Red series of sandstones. The junction between the two is faulted between Balfron and Kippen, which fault runs ENE - WSW. The Carboniferous system follows, which occupies the rest of the county.

The lowest member, the Calciferous Sandstone group, consisting of clays and marls with cement nodules, may be seen on both sides of the Campsie Fells; it is well exposed near Strathblane in Ballagan Burn. These beds are succeeded by alternating beds of contemporaneous tuffs and sandstones and then by great sheets of diabase-porphyrite which attain a considerable thickness and form well-marked ridges on the southern side of the Campsie Hills; they are best developed north of Kilsyth and east of Fintry. Meikle Bin and Dungoil mark the sites of the vents from which some of these volcanic rocks were erupted.

The Carboniferous Limestone series is the next in order and the lower beds may be found resting upon the volcanic rocks except where the junction is faulted and this series is let down, as it is between Strathblane and the Carron Water. As in the neighbouring counties, this series consists of a lower limestone group with the Index, Calmy and Castle Gary limestones a middle group with coals and clay ironstones and an upper limestone group with the Hosie and Hurlet limestones; below the latter is a bed of alum shale. These rocks are considerably folded about Kilsyth and in the directions of Banton and Cairnbeg and the "Riggin" near Kilsyth is a noteworthy example of an anticlinal fold.

The next series is the Millstone Grit sandstones with some coal-seams and fireclays which occurs towards the eastern boundary.

Coal is found between Grangemouth and Stenhousemuir and about Falkirk. The more important seams are the Virtuewell (the highest), the Splint, Craw and Coxhead coals. Intrusive sheets of basalt have penetrated the Carboniferous rocks and are now quarried for road metal; Abbey Craig and Stirling Castle hill are formed of one of the more important of these intrusions. Later basalt dikes of Tertiary age are not uncommon. A good deal of boulder clay covers the older rocks and an interesting blue marine clay is found beneath it in the Endrick valley.

The Carse of Stirling is overlaid by the muds and sands of the 50-foot raised beach and traces of the 100-foot beach are also to be found.

The county town is Stirling, a city of great historical importance, for it served as the capital of the Kingdom of Scotland into the early modern period, and throughout the Middle Ages it held the vital strategic point between Highland and Lowland. Stirling has claimed the title of city by ancient right since time immemorial but the claim was only upheld in 2002. 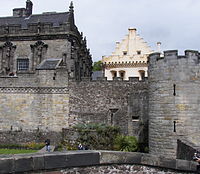 The Romans were in Stirlingshire: Tacitus in his Agricola was he first to note the strategic position of Stirling on the northern campaign of Gaius Agricola. In later years the imperial frontier was set here: the Antonine Wall, built by Lollius Urbicus, in AD 142 was driven through the south-eastern parts of what became Stirlingshire between the Forth and Clyde. It is locally known as Graham's Dyke. Castlecary and Camelon both have the remains of Roman forts of consequence on the line of the wall, and many interesting relics have been found. The Camelon causeway, a Roman road, ran eastwards from Castlecary, crossed the rampart at Camelon, whence it proceeded northwards to Stirling and the Forth, where there was a station near the present bridge of Drip. From there the road crossed the river to Dunblane in Perthshire.

To the north-east of the Carron foundry there stood, till its demolition in 1743, a fine circular Roman building called Arthur's Oon (oven), or Julius's Hof, but the two mounds in Dunipace parish supposed to have been raised as monuments of peace between the Romans and Caledonians are probably of natural origin.

After the withdrawal of the Romans from this furthest frontier, the Picts could resume their own country, until the advance of the English and the Scots. These lands appear to have been the frontier between Northumbria and the Pictish kingdoms, all was under the thumb of the Northumbrian kings until the Battle of Nechtansmere (probably fought in Angus or Perthshire) in 685. In 710, according to the Anglo-Saxon Chronicle, Beorhtfrið fought the Picts here, between the Carron and the Avon,[2] though of the purpose of the battle and of rest of the campaign we known nothing.

By the time of Malcolm Canmore (1058 - 1093) the lowland area had become settled, but the highland tract remained a disturbed and disturbing region and indeed so remained until the pacification following the Jacobite rising of 1745-46.

King David I held court at Stirling often, a precedent followed by his successors so that it became for some time an effective capital of the kingdom. Many of David's charters are stated to be issued at Striuelin (Stirling).[3] The earliest written reference to Stirlingshire appears in a charter of 1150 under the name Striuelinschire.[4]

The county played a central role in the Scottish Wars of Independence, and was particularly associated with many of the exploits of Sir William Wallace and Robert Bruce. Stirling was the vital strategic point coveted by all sides, and the castle changed hands several times. The three great battles of the wars were fought in the shire; Stirling Bridge (1297), Falkirk (1298) and Bannockburn (1314).

James III. was stabbed to death in a cottage in the village of Milton after the battle of Sauchieburn in 1488, but apart from the disastrous defeat of the Covenanters at Kilsyth in 1645 and the transitory triumph which Prince Charles Edward, the Young Pretender, won at Falkirk in 1746, the history of the shire practically centres in that of the county town.

Industry transformed parts of Stirlingshire in the nineteenth and twentieth centuries. The coalfield of the south-east was opened up. Iron ore and fireclay were worked, and oil-shale in the very east. Limestone was wrought in the Campsie Fells, and sandstone elsewhere. Busy ironworks were built at Carron and Falkirk. Chemical factories were built at Falkirk, Stirling, Denny and Lennoxtown. The railways were important in the growth of industry and of population. Before them came the canals, which have lately been revived for leisure use.

Industry has never departed the county, though it has undergone a decline in common with the rest of Britain. The oil refinery and port at Grangemouth remain one of the most important in Britain.

Things to see in Stirlingshire 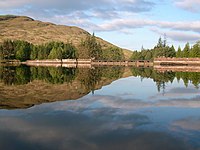