Staithes is a breath-takingly beautiful fishing village in the North Riding of Yorkshire, a village built in a deep cleft in the precipitious slopes where the Cleveland Hills reach the sea. Roxby Beck runs down through Staithes. Once his was principally a fishing port, but today Staithes is largely a tourist destination. It is within the North York Moors National Park.

At the turn of the 20th century, there were 80 full-time fishing boats putting out from Staithes. A hundred years later there is only one part-time boat, a family fishing operation worked by three generations of the Hanson family. There is a long tradition of using the coble (a traditional fishing vessel) in Staithes. 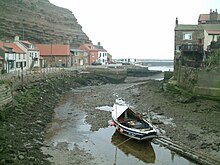 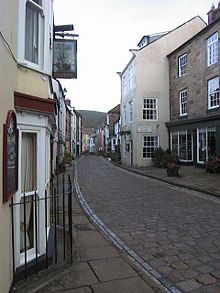 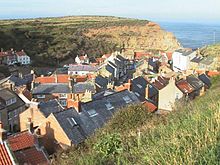 Staithes has a sheltered harbour, bounded by high cliffs and two long breakwaters. A mile to the west is Boulby Cliff where, for a brief period, alum, a mineral used to improve the strength and permanency of colour when dying cloth, was mined. The mining operation ended when a cheaper chemical method was developed. The ruined remnants of the mines can be seen from the cliff top when walking the Cleveland Way between Staithes and Skinningrove.

Staithes is a destination for geologists researching the Jurassic (Lias), strata in the cliffs surrounding the village. In the early 1990s, a rare fossil of a seagoing dinosaur was discovered after a rockfall between Staithes and Port Mulgrave to the south. This fossil has been the focus of an ongoing project to remove the ancient bones of the creature. Port Mulgrave remains one of the best places on the northern coast to find fossils of ammonites and many visitors spend hours cracking open the shaly rocks on the shoreline in the hope of finding a perfect specimen.

The permanent population of the village has dwindled due to more than half of the houses being second homes owned by outsiders from cities such as Leeds and York and further afield. Even though fewer than half of the houses in the village are occupied by local people, the traditions of the village have not yet died; many of the local women still wear Staithes bonnets, and the Staithes Fisher Men's Choir is still going strong. There is active local participation in the local RNLI Lifeboat crew.

The CBeebies series Old Jack's Boat, starring Bernard Cribbins, is set in and filmed in Staithes; Old Jack's house is at 4 Cowbar Bank in the town.

The village was home to a group of twenty to thirty artists known as the "Staithes group" or the "Northern Impressionists." The group contained renowned artists such as Edward E. Anderson, Joseph R. Bagshawe, Thomas Barrett and James W. Booth and was inspired by other impressionists such as Monet, Cézanne and Renoir. Dame Laura Knight became the most famous member of the Staithes Group; she and her husband and fellow painter Harold Knight kept a studio in the village.

To celebrate this history, Staithes held a Festival of Arts and Heritage in 2012. Many houses and other properties opened their doors to the public as pop-up galleries, creating a trail through the village. In addition, events celebrating the heritage of Staithes were held. Such was the success and interest in the festival, the villagers intend to make this an annual event.[1]

In 1745-1746, Staithes's most famous resident, James Cook (born in Marton near Middlesbrough), worked in Staithes as a grocer's apprentice where he first gained his passion for the sea. He moved to nearby Whitby where he joined the Royal Navy. William Sanderson's shop, where Cook worked, was destroyed by the sea, but parts were recovered and incorporated into "Captain Cook's Cottage". This has been the residency of a local Staithes family for several generations.

Staithes from the harbour at low water