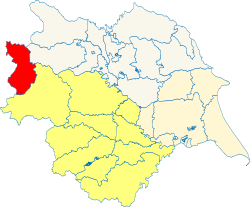 Staincliffe and Ewcross is a combined wapentake in the very north-west of the West Riding of Yorkshire, adjacent to the borders with Lancashire and Westmorland. Considered as a single wapentake, It had a population of 144,877 in 2011. Staincliffe and Ewcross can be found combined, as in the first census returns, but are often considered wapentakes in their own right, as on First Edition Ordnance Survey maps. Taken separately, Staincliffe is the most populous of the two, with a population of 133,447 in 2011, with Ewcross having 11,430 inhabitants.

To the east lie Hang West, Claro and Skyrack, with Agbrigg and Morley to the south.

Ewcross is the northern of the two parts, and includes the ancient parishes of: 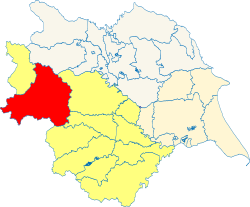 Staincliffe Wapentake shown within the West Riding and Yorkshire

Staincliffe includes the ancient parishes of: