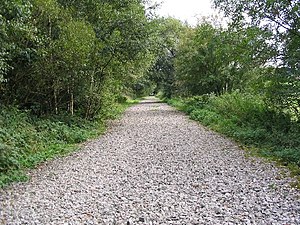 On the Staffordshire Way

The path links with the Cheshire Gritstone Trail, the Heart of England Way and the North Worcestershire Path.[1]

Starting in the north, the trail begins at Mow Cop Castle on gritstone hills of the Staffordshire Moorlands; the county's section of the Pennines. From here, the way heads south-west through the Staffordshire countryside, passing through Congleton, Leek, then along the Caldon Canal through the Churnet Valley to Uttoxeter.

The route then continues generally south-west through the Trent Valley, Shugborough Hall parkland and Cannock Chase (an Area of Outstanding Natural Beauty) to Penkridge.

From Penkridge the route turns south passing near to Brewood and continuing south-west through the parkland of Chillington Hall and close to Weston Park. It then turns south again passing through Codsall, within half a mile of Perton and near to Patshull Hall and Pattingham.

South of Patingham the Staffordshire Way continues south near to Enville and Highgate Common before finishing at the dramatic sandstone ridge of Kinver Edge.[2][1][3]

The Way was opened in three stages by the council between 1977 and 1983 and was resurveyed and refurbished with the assistance of the Ramblers' Association to mark the Association's 60th anniversary in 1995.[3]

The path connects with the North Worcestershire Path and the Worcestershire Way at Kinver Edge, the Heart of England Way at Cannock Chase, and the Gritstone Trail in north Staffordshire.[4]

Photographs along the Staffordshire Way