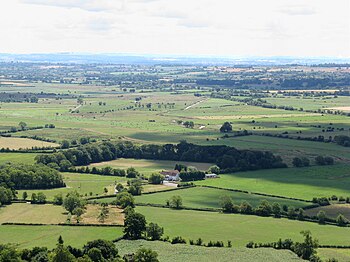 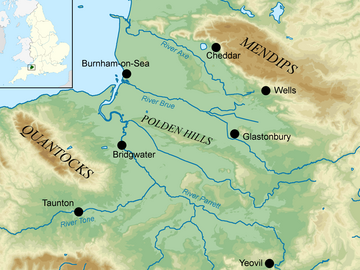 Map showing the Somerset Levels and the surrounding area

The Somerset Levels are the sparsely populated coastal plain and wetland area of central Somerset, lying between the Quantock and Mendip Hills. The Levels occupy an area of about 160,000 acres. Much of the land is at or below sea level and once these lands were a great fen, flooded all year or by seasonal floodwaters, its villages built on little fen islands and joined by causeways to each other or to the hills. The Levels have been drained leaving a green and fertile landscape, flat for mile upon mile.

One explanation for the county of Somerset's name is that winter flooding restricted the use of the Levels to the summer, giving its people the Old English name Sumorsæte, meaning summer people.

A Palaeolithic flint tool found in West Sedgemoor is the earliest indication of human presence in the area. Neolithic people exploited the reedswamps for their natural resources and started to construct wooden trackways, including the world's oldest known timber trackway, the Sweet Track, dating from the [[39th century BC. The Levels were the location of the Glastonbury Lake Village as well as two Lake villages at Meare Lake. Several settlements and hill forts were built on the natural "islands" of slightly raised land, including Brent Knoll and Glastonbury.

In the Roman period, sea salt was extracted and a string of settlements were set up along the Polden Hills. The discovery at Shapwick of 9,238 silver Roman coins, known as the "Shapwick Hoard", was the second largest ever found from the time of the Roman Empire.

A number of Anglo-Saxon charters document the incorporation of areas of moor in estates.

In 1685, the Battle of Sedgemoor was fought in the Bussex area of Westonzoyland to end the Monmouth Rebellion.

As a result of the wetland nature of the Moors and Levels, the area contains a rich biodiversity of national and international importance. It supports a vast variety of plant and bird species and is an important feeding ground for birds. The Levels and Moors include 32  Sites of Special Scientific Interest, of which 12 are also "Special Protection Areas". The area has been extensively studied for its biodiversity and heritage, and has a growing tourism industry.