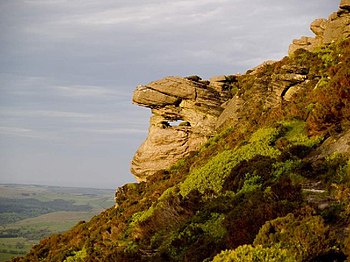 The Simonside Hills are a modest but spectacular range of hills in Northumberland, near the town of Rothbury. The highest point of the hills is Tosson Hill at 1,444 feet.

Most of the hills are around a thousand feet and are popular spots for hikers in the area. They are characterised by bold crags staring out over broad vistas, and from these tops the long sweep of the Cheviots opens up.

In a document dated to 1279 Simonside was called Simundessete. By 1580 the name had become Simontside.

A romantic suggestion is that the name is a corruption of Sigemund's seat or Sigemund's settlement. Sigemund (in its Old English form) is a name from old Germanic legend, most famously Sigmund the Germanic hero from the Volsunga Saga and the Nibelungenlied who is mentioned also in the Anglo-Saxon poem Beowulf.

WW Tomlinson, in his Comprehensive Guide To Northumberland (1916), stated that "Simon of mythology was, it seems, a domestic brewer to King Arthur, identical with the German Sigmund, and very fond of killing dragons".[1] His source for such a bold claim is not stated.

An alternative derivation for the name is a corruption of "seaman's sight", because the hills are visible from the North Sea.[1] This seems unlikely though as the word (ge)sete means seat or settlement and not sight (which is gesiht) and "Sæmanna(ge)siht") is unlikely to have become Simundessete in Middle English.

In Northumbrian folklore, malicious dwarves called duergar, are said to attack walkers in the hills or lead them astray, especially at night.