Silsoe is a little village in Bedfordshire, on the line of Watling Street, which is today marked with the A6 road (though the village has been bypassed since 1981).

The name of the village appears to be from the Old English Sifels hoh, meaning 'Sifel’s hill', from an otherwise unknown landowner: the name 'Sifel' may be Danish.

In the Domesday Book of 1086 the village is recorded as Siuuilessou or Sewilessou, and it records two manors, the larger held by Hugh of Walter, brother of Saher, and this later became the manor of Wrest. A smaller manor, believed to be that of Newbury, was owned by a concubine of Nigel d'Aubigny. The first market was held here weekly on Tuesdays and annual fair on May 1 from 1318.

A Latinized form of the village name may be seen as "Sevelesho", in a legal record of 1430, stating where the defendants William Butte, yeoman & William Clerk, husbandman lived.[1]

By 1563 there were 21 families living in Silsoe. The village growth was largely influenced by the needs of the Wrest Park estate and most of the inhabitants were servants, gardeners, stable hands and blacksmiths who lived in thatched and terrace cottages some of which still exist today. There was also a baker, who supplied Wrest House, and in the roof of the old bakehouse off the High Street, the oven ventilation can still be seen. From 1715 an annual fair was held on 10 September and a weekly market on Wednesdays. By the mid-19th century a number of trades were present in the village. There was a butcher, a milkman, cobbler, draper, builder and a grocer. 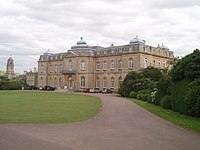 The Wrest Estate provided the village with a church – St James’s, a school and a row of almhouses, so sited that a row of cottages was hidden from the gentry’s view as they drove from the Park to the church in nearby Flitton. Silsoe’s position on a main road to London and half-way between Bedford and Luton made it a favourite halt for drovers and travellers stopping at the George coaching inn (first mentioned in 1624) on the High Street. Silsoe had many inns including The White Hart, The Ragged Staff, Duke of Kent’s Arms, The Bell, The Battle of Alma (or known as The Mouse's Hole in West End Road), Lord Nelson (Newbury Lane). Now only the George and Star and Garter in the High Street remain.

During the First World War Wrest House was used as a military hospital until 1916 when the house was damaged by fire. Lady Lucas, the last member of the de Grey dynasty, sold the House and estate before an auction that was to have been held at the Mart, Tokenhouse Yard, London EC2 on 17 July 1917.

Wrest Park's historic house and magnificent gardens are now part of English Heritage and have been restored and opened to the public from 4 August 2011.[2]

The village was, until 2007, the location of the Silsoe Research Institute, a BBSRC-funded body, in Wrest Park. The village also was home to Cranfield University's Silsoe campus for agricultural engineering. The former campus grounds are currently being redeveloped for housing, community and business use. The college was founded originally as the National College of Agricultural Engineering.

The parish church is the Church of St James. It stands on the site of a much earlier free chapel of St. Leonard, first mentioned in the Liber Antiquus (1209–35), that became a chapel of ease in the 17th century. The chapel belonged to the abbey of Elstow. Eventually the chapel had a central tower. In the fourteenth century two chantries were founded in the chapel. In the early 19th century Thomas Philip Robinson, 2nd Earl de Grey (1781–1859), wished to construct a spire but the weight of the structure proved too much for the supporting walls and the whole building collapsed. The church was rebuilt between 1829–1831 and opened on 20 February 1831.

St James consists of chancel, nave, aisles and a tower containing three bells. Nikolaus Pevsner admired it as ‘an astonishing job for its day’. The architect was Smith of Hereford who achieved ’an antiquarian accuracy here extremely rare ten years before Pugin’. Other sources such as Arthur Mee suggest that the architect was Earl de Grey, confirmed by Charles Read.[3] Built in local ironstone, all embattled. The chancel rails are made from 17th century oak taken from the chapel of the original Wrest House. Most of its stained glass windows represent the families of Wrest House. On Sunday. 25 July 1909 King Edward VII attended the church service here and made a donation towards the clock fund.[4]

The War Memorial outside the church is of stone. The church also has an inscribed board with a further list of men.[5]

In Church Road, is an ironstone village lock-up erected 1796 in a practical but attractive style, octagonal, with a pointed head to the doorway. It was used as a temporary place for stray animals or drunks, and its central pole, now removed, was used to chain prisoners in transit between Bedford and Luton.

The lock-up is no longer used.

The Millennium Green is an amenity space of 12 acres located off the High Street. Cranfield University landscape engineering students drew up designs in collaboration with residents of the village and won a grant totalling over £45,000 to form the Green, a tranquil centrepiece for the village. As an integral part of the village, Cranfield University had also been invited to contribute to Silsoe Parish Council's Millennium Time Capsule which was placed there in March 2000.