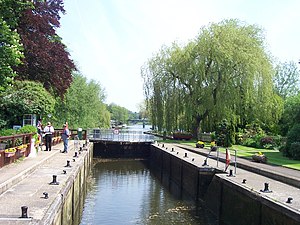 Shiplake Lock is a lock and weir situated on the River Thames near the village of Shiplake, Oxfordshire. It is just above the points where the River Loddon joins the Thames and Shiplake Railway Bridge crosses the river. The first pound lock was built by the Thames Navigation Commission in 1773.

The weir is some distance upstream of the lock between the lock island and Berkshire bank.

There is reference to the weir and flash lock at this location in the 16th century when it was known as "Cotterell's", a name which persisted after the pound lock was built. It was the second downstream of the eight locks built after the navigation act of 1770, and was completed in fir wood in 1773. At this time the towpath upstream was transferred from the Berkshire to the Oxfordshire bank. The lock had to be rebuilt of oak in 1787 as the fir had decayed. There were two mills on the island at this time. The lock was rebuilt again in 1874 and the weir in 1885.[1] The lock island was purchased by the City of London Corporation for camping in 1891,[2] and in 1907 the ruined mills were demolished.[1] Shiplake Lock was the first lock on the Thames to have hydraulic operation installed in 1961. During the winter of 2009/2010 the wooden lock gates were replaced with steel gates at a cost of £600,000.[3]

The reason for the purchase of Shiplake Lock Island by the Corporation was to preserve the amenities for bathing and camping. It was managed by the Corporation's City Lands Committee. However, managing at a distance proved a problem and the island was let in perpetuity in 1914 to the Thames Conservancy. The camp was then divided into 18 plots and run by the lock keepers.

Soon after taking over, the Conservancy allowed huts to be built near the tents. The use of these was restricted to cooking and they were not to be used for sleeping. (At that time, ladies were not allowed to sleep on the island at all, but had to retire to wooden huts on the Shiplake bank).

The Thames Conservancy and its successor organisations the National Rivers Authority and Environment Agency have not been prepared to give more than a one-year lease to the plotholders. However, the community has remained remarkably static with plots passing down the family line.

The lock can be reached from Lower Shiplake down Mill Road, and into Mill Lane, where there is a tarmac path to the lock along the edge of a field.

The river skirts Shiplake on the Oxfordshire bank and eventually passes into Sonning. Phillimore Island is just above the lock, and on the hill on the Shiplake bank is Shiplake House now the premises of Shiplake College. The college boat house is on the river bank at this point. Further on there is a double bend with two large islands The Lynch, and Hallsmead Ait followed by Buck Ait. On the bank opposite the Ait is St Patrick's Stream. This stream is believed to have been a tributary stream of the River Loddon which became an outfall when the water level was raised by the building of Shiplake Lock.[1] Apart from a small development here, the river banks are open fields to Sonning Bridge. Sonning lock is a short was upstream of the bridge, but there is a large backwater branching before the bridge on the Sonning Eye side which is crossed by Sonning Backwater Bridges.

The Thames Path stays on the Oxfordshire bank to Sonning, where it crosses the bridge to the other side and continues to Sonning Lock.

Shiplake Lock was a favourite place for fishing for the young George Orwell and his Buddicom friends.[4]