The County of Shetland or Zetland is the northernmost shire of the United Kingdom. It consists of a group of many mountainous islands in the seas to the north of Great Britain.

Due to the islands' high latitude the Northern Lights (aurora borealis) can sometimes be seen in the sky on clear winter nights, while in summer there is almost perpetual daylight, known locally as the "simmer dim".

The islands' remote, northern location has laid them open to different cultural influences. Early in the Viking Period Shetland was settled by Norsemen, and whether they drove its previous population out or absorbed them, Shetland became a Norse land and almost all of Shetland's place-names are derived from the Norse language. In the days of King Harold Fairhair of Norway, Shetland became part of the new Earldom of Orkney, and it remained under the Norwegian crown until 1468, when it was given to King James III King of Scots as a pledge for a dowry, which pledge was not redeemed.

The Norn language had died out by the nineteenth century, replaced by Scots and English, though its influence remains strong in dialect words.

Shetland has some 100 islands, of which only 15 are inhabited.

The main island of the group is Mainland, which contains the county's capital, Lerwick, its former capital, Scalloway, and most of the substantial settlements. Mainland has an area of 373 square miles, making it the fifth-largest island of the British Isles. 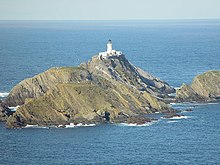 The inhabited islands in the main group are:

In the early 1970s, oil and gas were found off Shetland. The East Shetland Basin is one of the largest petroleum sedimentary basins in Europe and the oil extracted there is sent to the terminal at Sullom Voe (Norse: Solheimavagr). Sullom Voe terminal opened in 1978 and is the largest oil export harbour in the United Kingdom, with a volume of 25 million tons per year.

Income from oil and related economies has reduced emigration and vastly improved infrastructure throughout Shetland. Sheep farming also plays a big part in Shetland today as does fishing. 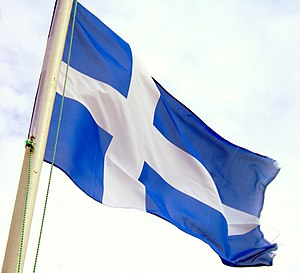 Roy Grönneberg designed a flag for Shetland in 1969 in cooperation with Bill Adams, to mark the 500 year anniversary of the transfer of Shetland from Norway to Scotland.[2]

The rationale of the design was to illustrate the Shetland had been a part of Norway for 500 years and a part of Scotland for 500 years. The colours are identical to those of the St Andrew flag of Scotland, but shaped in the Nordic cross. (It is the same design Icelandic republicans used in the early 20th century, known in Iceland as Hvítbláinn, the white-blue.)