The name Sgùrr na Lapaich means "Peak of the Bog", which is an odd name for a fine mountain like this one; its long ridges, deep corrie]]s and lochans, culminate in a satisfying rocky peak with good views out over the surrounding Highlands of Ross-shire. Another peak bears this name too; Sgurr na Lapaich is the name of an outlying subsidiary top of Mam Sodhail. 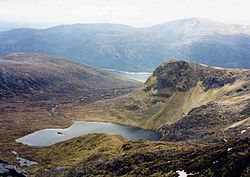