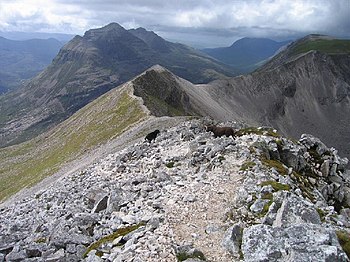 The Scottish Mountaineering Club areas are seventeen sections of the Highlands defined by the Scottish Mountaineering Club for the purpose of listing mountains and in particular the munros. As such, they cover the broad area where such great mountains are to be found, which is the in effect the whole of the Highlands. The southernmost munro is Ben Lomond (3,196 feet) in Stirlingshire and in Area 1) and the northernmost Ben Hope (3,041 feet) in Sutherland and in Area 16, with 155 miles between them.

The areas include groups of mountain ranges and are defined by geography. They do not follow county boundaries: quite the contrary, as county boundaries in the Highlands most often follow the watersheds along the high mountain ridges, the great ranges are divided between shires, which would not do for grouping ranges, and instead the SMC area boundaries run in valleys and lochs.

Section 1, between the Loch Lomond to Loch Tay, is in the very southwest of the Highlands, but including also the Arrochar Alps west of Loch Lomond. It includes parts of Argyllshire, Dunbartonshire, Stirlingshire and Perthshire.

This area encompasses the Arrochar Alps, Glen Lednock, the Crianlarich Hills, Loch Earn and the Tyndrum Hills, with 19 munros in all; the highest of them being Ben More (Crianlarich) at 3,852 feet.

Section 2 extends from Loch Tay west to the wild hills of Rannoch Moor, including parts of Perthshire and Argyllshire.

Within this area are the Lawers Hills north of Loch Tay, Glen Lochay, Glen Lyon and the Bridge of Orchy Hills. It contains 26 munros of which the highest is Ben Lawers, 3,983 feet, in the Lawers Hills.

Section 3 is south of Loch Leven as far as Glen Lochy: a compact area of Lorn, all in Argyllshire.

Ranges in this area include those of Glencoe Hills, Etive and Cruachan. Other regions in this area are named Appin, Ballachulish and Black Mount.

There are 26 munros in this section, the highest of which is Bidean nam Bian in the Glencoe Hills of Argyllshire (3,773 feet).

The highest of all the mountains is found in this section: Ben Nevis at 4,409 feet, and Section 4 contains four of the top ten munros, listed as numbers 1, 7, 8 and 9. This area is mainly in Inverness-shire, with a little of Perthshire in the Alder Hills.

This area contains the Nevis Range and the nearby Grey Corries and Mamores, along with the Alder Hills and the Aonachs. There are 34 munros in Section 4, the highest being of course Ben Nevis and the lowest Creag Pitridh at 3,031 feet.

Loch Rannoch to Drumochter encompasses the Drumochter Hills, both sides of the Pass of Drumochter and up to Meall Chuaich. The area is across the boundary of Perthshire with Inverness-shire.

Section 5 is bounded by Loch Ericht in the west and Glen Tromie in the east. This area has 7 munros, of which the highest is Beinn Udlamain at a height of 3,317 feet.

Glen Garry to Braemar is the western part of the Mounth, within the Grampian Mountains. This area encompasses parts of Perthshire and Aberdeenshire, and Càrn an Fhidhleir is at the meeting of these with Inverness-shire.

Within this area are Atholl, Beinn a' Ghlo and the western part of Glen Shee. It has 15 munros of which the highest is Beinn a' Ghlò's highest peak, Carn nan Gabhar (3,678 feet)

Glen Shee to Mount Keen is the easternmost SMC area. It is the eastern part of the Mounth , within the Grampian Mountains, which reaches as far as the sea coast in Kincardineshire, though the effective section for counting munros goes no further than Mount Keen, the easternmost munro of all. This area includes parts of Aberdeenshire and Angus and the main ridge within it marks the county boundary.

The area contains may be divided for convenience into Glen Esk, eastern Glen Shee, the Lochnagar Hills of the White Mounth and Glen Clova. It has 14 munros of which the highest is Lochnagar itself (3,789 feet), at its summit known as Cac Carn Beag.

The Cairngorms are a distinctive range of mountains, between the Grampians and Strathspey, in Aberdeenshire, Banffshire and Inverness-shire.

There are 14 munros in the Cairngorms, of which the highest is Ben Macdhui (4,295 feet); the second-highest mountain in the British Isles. The Cairngorms are perhaps the most consistently high of the Highland mountains, with half of the top twenty mountains, including numbers 2, 3, 4, 5 and 6 in the list.

Glen Roy to the Monadh Liath is the long section south of the Great Glen, from the Monadhliath peaks southwest to Spean Bridge, entirely in Inverness-shire.

The munros here are in two separated chains; the maiun Monadhliath mountains and those north of Loch Laggan, which might be considered an outlying massif of Monadhliath. The whole area has 9 munros of which the highest munro is Creag Meagaidh (3,701 feet).

Loch Eil to Glen Shiel covers a broad area by the west coast and north of the Great Glen. It is almost wholly in Inverness-shire (of which Loch Eil marks the southern boundary) but running north to the boundary of Ross-shire by Glen Shiel.

Within this area are serval small groups of mountains, as those of Morar and Knoydart and the Glen Shiel Hills, though the latter spread along both sides of the glen and only South Glenshiel is included in Section 10. The u-shaped ridge of the Glen Shiel Hills forms the county boundary.

Glen Affric and Kintail is a relatively small area north of the Great Glen, near the west coast, extending from Glen Shiel in the south to Loch Mullardoch in the north. The two main ridges here are North Glen Shiel, including the famous Five Sisters of Kintail, and the ridge between Glen Affric and Loch Mullardoch, and these ridges form the winding county boundary between Inverness-shire and Ross-shire.

Glen Cannich to Glen Carron is another relatively small section of the Northwest Highlands close to the west coast. It is mainly in Ross-shire but extending to Inverness-shire too, extending from Loch Mullardoch north to the River Carron, Wester Ross.

There are two main munro-bearing parts labelled 'Monar' and 'Mullardoch' after the lochs at their feet. There are 14 munros overall, of which the highest is Sgùrr na Lapaich (3,773 feet) between Loch Mullardoch and Loch Morar.

Coulin and Torridon fills the triangular shaped Torridon peninsula on the west coast of Ross-shire. The major mountain here is Liathach, a broad, dominating massif whose peaks include two full munros and other munro tops, and by it Beinn Eighe, with another two full munros.

Area has 9 munros, of which the highest is Spidean a' Choire Leith on Liathach (3,461 feet).

Loch Maree to Loch Broom is a small section of Wester Ross, but a rugged one. The land between the lochs is in Ross-shire (interrupted by a couple of detatched parts of Cromartyshire though with no munros in either of them), though the area as defined includes the Fannichs to the east, which are mainly within a part of Cromartyshire.

The main highlight of this Section is An Teallach, a long, broad mountain close to the coast with two full munros and seven munro tops, all overlooking Loch Broom. The area as a whole contains four main parts; An Teallach, The Fannichs, Kinlochewe and Letterewe with the Fisherfield Forest. Section 14 has 19 munros, of which the highest is Sgùrr Mòr (3,642 feet) in the Fannichs, Cromartyshire's county top.

Coigach to Cape Wrath encompasses the Coigach peninsula of Cromartyshire and all of Sutherland, thus reaching the north coast of Great Britain.

There are no munros in Coigach but overall in this area are four of them, all in Sutherland; two in Assynt and two beyond. Of the 4 munros, the highest munro is Ben More Assynt (3,274 feet).

The Islands are the Hebrides, though only two Hebridean islands have any munros and so for this purpose Section 17's two islands are:

Between them, Skye and Mull have 13 munros; all but one in the Cuillin range of Skye, the last, Ben Mor on Mull. The highest of this area is Sgùrr Alasdair on Skye.