Sarratt is a village in Hertfordshire, a long village built on either side of a long, broad village green.

The village lies in the beginnings of the Chiltern Hills north of Chorleywood and Croxley Green, entirely surrounded by farmland. It is close to the border with Buckinghamshire; the River Chess flows at the bottom of the parish, in the hamlet of Sarratt Bottom, and there the river marks the county boundary.

The flint and brick Church of the Holy Cross was founded in 1190 in the hamlet of Sarratt. From the 17th century a large linear village known as Sarratt Green developed nearly a mile away. It is now simply called Sarratt and the original hamlet is now known as Church End.

In the novels of John le Carré, Sarratt was the fictional location of an agent training school and interrogation centre for the British intelligence service, MI6.[1] Le Carré and former KGB Colonel Mikhail Lyubimov contributed stories to Sarratt and the Draper of Watford, a book published by Village Books in 1999 as a fund-raiser for village charities.[2] 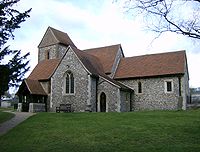 Church of the Holy Cross, Sarratt

Holy Cross Church is of a rare design, with later Norman features. It is believed to have been founded in 1190. However the current church may stand on the site of an earlier church.

In 1199 King John confirmed the grant of Sarratt to St Albans Abbey, from which it was released at the Reformation and the Dissolution of the Monasteries.

The church may be familiar to filmgoers; it was used in the film Four Weddings and a Funeral.[1]