Difference between revisions of "Salisbury Cathedral"

Salisbury Cathedral is one of the leading examples of Early English architecture.[1] The main body of the cathedral was completed in only 38 years, from 1220 to 1258.

The cathedral has the tallest church spire in the United Kingdom (404 feet). Visitors can take the "Tower Tour" where the interior of the hollow spire, with its ancient wood scaffolding, can be viewed. The cathedral also has the largest cloister and the largest cathedral close in Britain (80 acres).[1] It contains the world's oldest working clock (from AD 1386) and has the best surviving of the four original copies of Magna Carta.[1] In 2008, the cathedral celebrated the 750th anniversary of its consecration.[2] 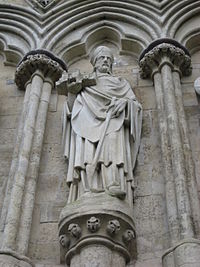 As a response to deteriorating relations between the clergy and the military at Old Sarum Cathedral, the decision was taken to resite the cathedral, and the bishopric was moved to a new site in the meadows where the rivers meet south of Old Sarum: here a new town was created around the new cathedral; New Sarum, which assumed the old name, Salisbury. The move occurred during the tenure of Bishop Richard Poore, a wealthy man who donated the land on which it was built. The new cathedral was paid for by donations, principally from clergy, who were asked to contribute a fixed annual sum until it was completed.[3] A legend tells that the Bishop of Old Sarum shot an arrow in the direction he would build the cathedral but the arrow hit a deer that ran on and died in the place where Salisbury Cathedral now stands.

The foundation stone was laid on 28 April 1220.[4] Much of the freestone for the cathedral came from Teffont Evias quarries.[5] As a result of the high water table in the new location, the cathedral was built on only four feet of foundations, and by 1258 the nave, transepts and choir were complete. The only major sections built later were the cloisters in 1240, the chapter house in 1263, tower and spire, which at 404 feet dominated the skyline from 1320, and has done ever since. Because most of the cathedral was built in only 38 years, it has a single consistent architectural style, Early English Gothic.

Although the spire is the cathedral's most impressive feature, it has proved to be troublesome. Together with the tower, it added 6,397 tons to the weight of the building. Without the addition of buttresses, bracing arches and anchor irons over the succeeding centuries, it would have suffered the fate of spires on later great ecclesiastical buildings (such as Malmesbury Abbey) and fallen down; instead, Salisbury remains the tallest church spire in the United Kingdom. The large supporting pillars at the corners of the spire are seen to bend inwards under the stress. The addition of reinforcing tie beams above the crossing, designed by Christopher Wren in 1668, arrested further deformation.[6] The beams were hidden by a false ceiling, installed below the lantern stage of the tower.

Significant changes to the cathedral were made by the architect James Wyatt in 1790, including replacement of the original rood screen and demolition of a bell tower which stood about 320 feet (100 m) north west of the main building. Salisbury is one of only three English cathedrals to lack a ring of bells, the others are Norwich Cathedral and Ely Cathedral. However it does strike the time every 15 minutes with bells. In total, 70,000 tons of stone, 3,000 tons of timber and 450 tons of lead were used in the construction of the cathedral.[7]

The west front is of the screen-type, clearly deriving from that at Wells. It is composed of two stair turrets at each extremity, with two niched buttresses nearer the centre line supporting the large central triple window. The stair turrets are topped with spirelets and the central section is topped by a gable which contains four lancet windows topped by two round quatrefoil windows surmounted by a mandorla containing Christ in Majesty. At ground level there is a principal door flanked by two smaller doors. The whole is highly decorated with quatrefoil motifs, columns, trefoil motifs and bands of diapering. The west front was almost certainly constructed at the same time as the cathedral.[8] This is apparent from the way in which the windows coincide with the interior spaces. The entire façade is about 110 feet high and wide. It has been said that the front was built on a scale smaller than was initially planned. It lacks full-scale towers and/or spires as can be seen, for example at Wells, Lincoln, Lichfield, etc.[9] The facade is disparaged by Alec Clifton-Taylor,[10] who comments that it is the least successful of the English screen-facades and is a travesty of its prototype (Wells). He finds the composition to be unco-ordinated, and the Victorian statuary "poor and insipid".

The front accommodates over 130 shallow niches of varying sizes, 73 of these niches contains a statue. The line of niches extend round the turrets to the north, south and east faces. There are five levels of niches (not including the mandorla) which show, from the top, angels and archangels, Old Testament patriarchs, apostles and evangelists, martyrs, doctors and philosophers and, on the lower level, royalty, priests and worthy people connected with the cathedral. The majority of the statues were placed during the middle of the 19th century, however seven are from the 14th century and several have been installed within the last decade. (see main article) 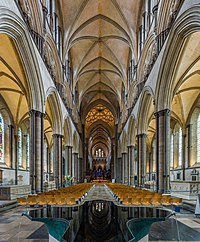 The Nave, Transepts and North Door from the East

Salisbury Cathedral is unusual for its tall and narrow nave, and has visual accentuation due to the use of light grey Chilmark stone for the walls and dark polished Purbeck marble for the columns. It has three levels: a tall pointed arcade, an open gallery and a small clerestory.[11] Lined up between the pillars are notable tombs such as that of William Longespée, half brother of John, King of England|King John and the illegitimate son of Henry II, who was the first person to be buried in the cathedral.[12]

Chapter house and the Magna Carta

The chapter house is notable for its octagonal shape, slender central pillar and decorative mediæval frieze. It was redecorated in 1855-9 by William Burges. The frieze circles the interior above the stalls and depicts scenes and stories from the books of Genesis and Exodus, including Adam and Eve, Noah, the Tower of Babel, and Abraham, Isaac and Jacob. The chapter house also displays the best-preserved of the four surviving original copies of the Magna Carta. This copy came to Salisbury because Elias of Dereham, who was present at Runnymede in 1215, was given the task of distributing some of the original copies. Elias later became a canon of Salisbury and supervised the construction of the cathedral.

Depictions in art, literature and film 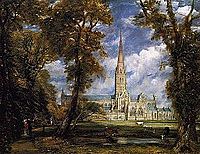 The cathedral is the subject of famous paintings by John Constable. As a gesture of appreciation for John Fisher, the Bishop of Salisbury, who commissioned this painting, Constable included the Bishop and his wife in the canvas (bottom left). The view depicted in the paintings has changed very little in almost two centuries.

The cathedral is also the subject of William Golding's novel The Spire which deals with the fictional Dean Jocelin who makes the building of the spire his life's work. In Edward Rutherfurd's historical novel Sarum the narrative deals with the human settlement of the Salisbury area from pre-historic times just after the last Ice Age to the modern era. The construction of the cathedral itself, its famous spire, bell tower and chapter house are all important plot points in the novel, which blends historic characters with invented ones. The cathedral has been mentioned[13] by the author Ken Follett as one of two models for the fictional Kingsbridge Cathedral in his historical novel, The Pillars of the Earth. It was also used for some external shots in the 2010 miniseries based on Follett's book and was shown as it is today in the final scene. The cathedral was the setting for the 2005 BBC television drama Mr. Harvey Lights a Candle, written by Rhidian Brook and directed by Susanna White. Kevin McCloud climbed the cathedral in his programme called Don't Look Down! in which he climbed high structures to conquer his fear of heights. The cathedral was the subject of a Channel 4 Time Team programme which was first broadcast on 8 February 2009. 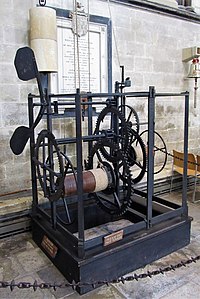 The Salisbury cathedral clock dating from about AD 1386 is supposedly the oldest working modern clock in the world.[14] The clock has no face because all clocks of that date rang out the hours on a bell. It was originally located in a bell tower that was demolished in 1792. Following this demolition, the clock was moved to the Cathedral Tower where it was in operation until 1884. The clock was then placed in storage and forgotten until it was discovered in 1929, in an attic of the cathedral. It was repaired and restored to working order in 1956. In 2007 remedial work and repairs were carried out to the clock.[15] 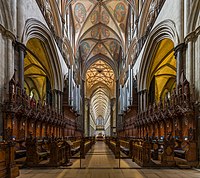 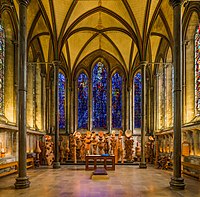 The cathedral's current organ was built in 1877 by Henry Willis & Sons.[16] Sir Walter Alcock, who was organist of the cathedral from 1916, oversaw a strictly faithful restoration of the famous Father Willis organ,[17] even going to such lengths as to refuse to allow parts of the instrument to leave the cathedral in case any unauthorised tonal alteration were made without his knowledge.[18]

An earlier organ was presented by King George III and was installed on top of the stone screen dividing the choir from the nave. It was later taken out and moved to St Thomas's Church.[19]

Salisbury Cathedral Choir auditions boys and girls aged 7–9 years old annually for scholarships to Salisbury Cathedral School, housed in the old Bishop's Palace. The boys choir and the girls choir (each 16 strong) sing alternate daily Evensong and Sunday Matins and Eucharist services throughout the school year. There are also many additional services during the Christian year particularly during Advent, Christmas, Holy Week, and Easter. The Advent 'From Darkness to Light services are the best known. Choristers come from across the country, some boarding. Six lay vicars (adult men) comprise the rest of the choir (singing tenor, alto and bass parts).

The cathedral previously employed five cathedral constables (known as "Close Constables"). Their duties mainly concerned the maintenance of law and order in the cathedral close. They were made redundant in 2010 as part of cost-cutting measures and replaced with "traffic managers".[20] The constables were first appointed when the cathedral became a liberty in 1611 and survived until the introduction of municipal police forces in 1835 with the Municipal Corporations Act.[21] In 1800 they were given the power, along with the city constables, to execute any justices' or court order requiring the conveyance of prisoners to or from the county gaol (at Fisherton Anger, then outside the city of Salisbury) as if it were the city gaol (and, in so doing, they were made immune from any legal action for acting outside their respective jurisdictions).[22] The right of the Cathedral, as a liberty, to maintain a separate police force was conclusively terminated by the Local Government Act 1888.[23][24]

f*A history of the choir