Difference between revisions of "Sabrina Way" 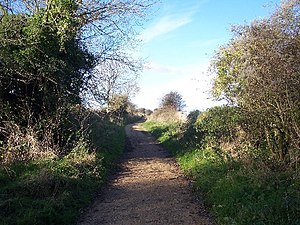 The Sabrina Way is a waymarked long-distance footpath and bridleway running for 203 miles from the Pennines to the River Severn, and then out to the Cotswolds, running through six counties:

The route is named after the River Severn along which the middle section runs, from the Latin name of that river.

The route is primarily designed and intended for horses and riders]] and links numerous bridleways between the Pennines, the Cotswolds and The Ridgeway.

In Derbyshire, the route leaves the Pennine Bridleway, passing through the length of Staffordshire and after crossing through Cannock Chase it enters Shropshire. It crosses the Severn at Broseley and headings south parallel to the river. It runs through Weston Park and into the Wyre Forest in northern Worcestershire, then through that county, west of the Malvern Hills to skirt into Herefordshire.

The route does encompass some tarmac road riding but is mainly on bridleways and paths.