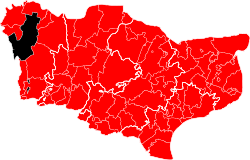 Ruxley Hundred, shown within the Lathe of Sutton-at-Hone and Kent

Ruxley is a hundred in Metropolitan Kent, within the Lathe of Sutton at Hone.[1][2] It is alternatively known as Rokesley, and in the Domesday Book Helmestrei[3][4]

The River Cray flows northward through six of its parishes, four of which are named after it. The River Cray rises in Orpington then flows through St Mary Cray, St Paul's Cray, North Cray, Foots Cray, and Bexley before crossing the northern border and Watling Street into the Hundred of Lesnes.

In 1797 the hundred was recorded as being divided into two half hundreds named Upper Ruxley and Lower Ruxley and under the jurisdiction of two constables.[4]

There is also a detached part of the hundred to the south containing parts of two parishes, Hever and Chiddingstone, which are in the geographical area of the Somerden Hundred and usually included in it. The settlement of Ruxley itself had its own parish[3] until 1557 when it was absorbed into North Cray parish.[5]

Ruxley occupies a central north-western position within the Sutton-at-Hone lathe, with borders with all but perhaps one of the other hundreds in the lathe. Ruxley is bordered by the hundreds of Little and Lesnes to the north; Dartford and Wilmington to the north-east; Axtane to the east and north-east; Codsheath to the east and south-east; Westerham and Edenbridge to the south; Bromley and Beckenham to the west; and Blackheath to the north-west. Ruxley's south-western border also forms part of the Kent border with Surrey. The only hundred of the Sutton at Hone lathe without a common border with Ruxley is the Hundred of Somerden, the southernmost hundred of the lathe. However if we include the detached part, it would also give Ruxley a border with the Somerden Hundred, and thus give Ruxley borders with all other hundreds in the lathe of Sutton-at-Hone.