The Royal Observatory, Greenwich is an observatory, and now a museum, standing on a hill in Greenwich Park, overlooking the River Thames. It played a major role in the history of astronomy and navigation, and defined the prime meridian of the world, the Greenwich Meridian, from which we have Greenwich Mean Time: noon GMT is when it is exactly noon at the cross-hairs of the telescope of the Royal Greenwich Observatory.

In the International Astronomical Union observatory list, the Royal Observatory in Greenwich has the code '000': the first in the list.[1]

The Royal Observatory, the National Maritime Museum, the Queen's House and the Cutty Sark are collectively designated 'Royal Museums Greenwich'.[2]

The building was known as Old Royal Observatory from 1957 to 1998, when the working 'Royal Greenwich Observatory' moved from Greenwich to Herstmonceux. 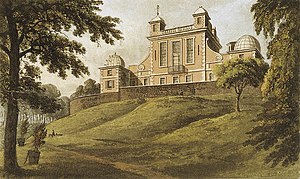 The Royal Observatory c. 1902 as depicted on a postcard

The observatory was commissioned in 1675 by King Charles II, with the foundation stone being laid on 10 August. The site was chosen by Sir Christopher Wren.[3] At that time the king also created the position of Astronomer Royal, to serve as the director of the observatory and to "apply himself with the most exact care and diligence to the rectifying of the tables of the motions of the heavens, and the places of the fixed stars, so as to find out the so much desired longitude of places for the perfecting of the art of navigation." He appointed John Flamsteed as the first Astronomer Royal. The building was completed in the summer of 1676.[4] The building was often called "Flamsteed House", in reference to its first occupant.

The scientific work of the observatory was relocated elsewhere in stages in the first half of the 20th century, and the Greenwich site is now maintained almost exclusively as a museum, although the AMAT telescope became operational for astronomical research in 2018. 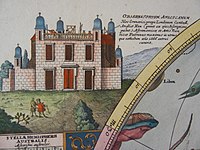 There had been significant buildings on this land since the reign of William I.[7] Greenwich Palace, on the site of the present-day Maritime Museum, was the birthplace of both Henry VIII and his daughters Mary I and Elizabeth I; the Tudors used Greenwich Castle, which stood on the hilltop that the Observatory presently occupies, as a hunting lodge. Greenwich Castle was reportedly a favourite place for Henry VIII to house his mistresses, so that he could easily travel from the Palace to see them.[8]

In 1676 Flamsteed's house on Greenwich Hill was completed, the Royal astronomer's place of operation.[9] 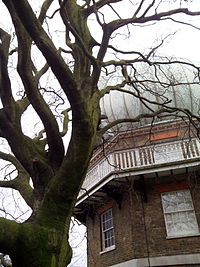 The establishment of a Royal Observatory was proposed in 1674 by Sir Jonas Moore who, in his role as Surveyor-General of the Ordnance, persuaded King Charles II to create the observatory, with John Flamsteed installed as its director.[10] The Ordnance Office was given responsibility for building the Observatory, with Moore providing the key instruments and equipment for the observatory at his own personal cost. Flamsteed House, the original part of the Observatory, was designed by Sir Christopher Wren, probably assisted by Robert Hooke, and was the first purpose-built scientific research facility in Britain. It was built for a cost of £520 (£20 over budget) out of largely recycled materials on the foundations of Duke Humphrey's Tower, the forerunner of Greenwich Castle, which resulted in the alignment being 13 degrees away from true North, somewhat to Flamsteed's chagrin.

Moore donated two clocks, built by Thomas Tompion, which were installed in the 20 foot high Octagon Room, the principal room of the building. They were of unusual design, each with a pendulum 13 feet in length mounted above the clock face, giving a period of four seconds and an accuracy, then unparalleled, of seven seconds per day.

The original observatory housed the astronomer royal, his assistant and his family as well as the scientific instruments to be used by Flamsteed in his work on stellar tables. Over time the institution became a more established institution, thanks to its links to long-lasting government boards (the Board of Ordnance and Board of Longitude) and oversight by a Board of Visitors, founded in 1710 and made up of the President and Members of the council of the Royal Society.[11] By the later 18th century it incorporated additional responsibilities such as publishing the Nautical Almanac, advising government on technical matters, disseminating time, making meteorological and magnetic observations and undertaking astrophotography and spectroscopy. The physical site[12] and the numbers of staff[13] increased over time as a result. 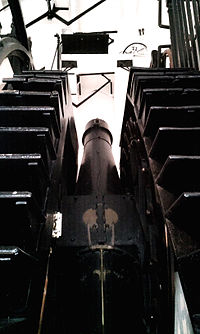 When the observatory was founded in 1675, one the best star catalogues was Tycho Brahe's 1000-star catalogue from 1598.[14] However, this catalogue was not accurate enough to determine longitudes. One of Flamsteed's first orders of business was creating more accurate charts suitable for this purpose.

One of the noted charts made at Greenwich was by the Astronomer Royal James Bradley, who between 1750 and 1762 charted sixty thousand stars, so accurately his catalogues were used even in the 1940s. Bradley was the third Astronomer Royal, and his tenure started in 1742.[15]

In the early 19th century, the main positional devices were the Troughton Transit instrument and a mural circle, but after George Biddell Airy took over as Astronomer Royal in 1835, he embarked on a plan to have better instruments at Greenwich observatory.[16]

Positional astronomy was one of the primary functions of Greenwich for the Admiralty.[17] The Astronomer Royal Airy was an advocate of this and the transit circle instrument he had installed in 1851 was used for a century for positional astronomy.[17] One of the difficulties with positional astronomy, is accounting for the refraction of light through Earth's atmosphere.[18] Sources of error include the precision of the instrumentation, and then there has to be accounting for precession, nutation, and aberration.[19] Sources of error in the instrument have to be tracked down and accounted for to produced more accurate results.[16]

The Shuckburgh telescope of the Royal Observatory was used for the 1832 transit of Mercury.[21] It was equipped with a filar micrometer by Peter Dollond and was used to provide a report of the events as seen through the small refractor.[21] By observing the transit in combination with timing it and taking measures, a diameter for the planet was taken.[21] They also reported the peculiar effects that they compared to pressing a coin into the Sun.[21] The observer remarked:

The Royal Observatory at Herstmonceux

After the Second World War, in 1947, the decision was made to move the Royal Observatory to Herstmonceux Castle[22] and 320 adjacent acres 44 miles south-south-east of Greenwich near Hailsham in Sussex, due to light pollution in London. The Observatory was officially known as the Royal Greenwich Observatory, Herstmonceux. Although the Astronomer Royal Harold Spencer Jones moved to the castle in 1948, the scientific staff did not move until the observatory buildings were completed, in 1957. Shortly thereafter, other previously dispersed departments were reintegrated at Herstmonceux, such as the Nautical Almanac Office, Chronometer Department, the library, and observing equipment.[23]

The largest telescope at Greenwich at that time, the Yapp telescope 36-inch reflector, was moved out to Herstmonceux in 1958.[24] There it was reconstructed in Dome B of the facility.[24] There it was used for astronomy in the 1960s, 1970s, and 1980s. It was left behind at Herstmonceux in 1990 in its dome when the organization moved once again.[23]

The Royal Observatory at Cambridge 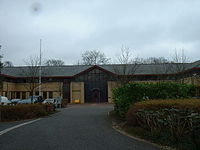 In 1990 the Royal Observatory moved from Herstmonceux to a new site at Cambridge, adjacent to the University's Institute of Astronomy, where it occupied Greenwich House just to the north of the Cambridge Observatory. By now, the Royal Greenwich Observatory's focus had moved from carrying out observations from the British Isles to providing technical support, acting as a conduit between scientists in British universities and the powerful British-owned telescopes (such as the Isaac Newton Telescope, the Anglo-Dutch Jacobus Kapteyn Telescope, and the William Herschel Telescope) on the Canary Islands and Hawaii.[25]

After abandoning a plan to privatise the RGO and the Royal Observatory Edinburgh, the Particle Physics and Astronomy Research Council as the RGO's funding body made the decision to close the institution and the Cambridge site by 1998.[25] When the Royal Greenwich Observatory was closed as an institution, the HM Nautical Almanac Office transferred to the Rutherford Appleton Laboratory (Harwell Science and Innovation Campus in Chilton, Berkshire), while other work went to the UK Astronomy Technology Centre in Edinburgh. The old observatory site at Greenwich returned to its original name – the Royal Observatory, Greenwich – and was made part of the National Maritime Museum.

Greenwich site returns to active use

The Queen's House, Greenwich, with the Royal Observatory behind

In 2018 the Annie Maunder Astrographic Telescope (AMAT) was installed at the ROG in Greenwich.[26][27] AMAT is a cluster of four separate instruments, to be used for astronomical research; it had achieved first light by June 2018, and contains:[28]

The telescopes and the works at the site required to operate them cost about £150,000, from grants, museum members and patrons, and public donations.

The telescope was installed in the Altazimuth Pavilion,[29] from which the multi-purpose telescope is controlled by a computer system.[29] 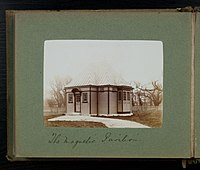 The first magnetic observation was taken in 1680 by the first Astronomer Royal, John Flamsteed, using a magnetic needle from the Royal Society.[30] The second and third Astronomers Royal, Edmond Halley and then James Bradley, also took some magnetic measurements during their tenure.[30]

In the 19th century George Airy established the Magnetical and Meteorological Department.[30]

The first Magnetic House was built next to the observatory but by 1900 a second, about 300-400 metres from the main observatory, was built to reduce magnetic interference.[31] Both houses were made of non-magnetic materials.[31] The older building was called the Magnet House, but iron added to buildings in the 1890s at the observatory was throwing off measurements, so the instruments were moved to the Magnetic Pavilion.[31] A new Magnetograph House was also completed by 1914.[31]

One of the special events that occurred in the study of magnetism was when François Arago and Alexander von Humboldt took magnetic observations at Greenwich in 1822.[32] In 1825 Arago won the Copley Gold Medal for this research[32] 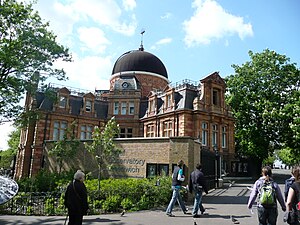 Tourists at the Observatory museum

The observatory buildings at Greenwich became a museum of astronomical and navigational tools, which is part of the Royal Museums Greenwich.[33] Notable exhibits include John Harrison's sea watch, John Harrison#H4|the H4, which received a large reward from the Board of Longitude, and his three earlier marine timekeepers; all four are the property of the Ministry of Defence. Many additional horological artefacts are displayed, documenting the history of precision timekeeping for navigational and astronomical purposes, including the mid-20th-century Russian-made F.M. Fedchenko clock (the most accurate pendulum clock ever built in multiple copies). It also houses the astronomical instruments used to make meridian observations and the 28-inch equatorial Grubb refracting telescope of 1893, the largest of its kind in the UK. The Shepherd Clock outside the observatory gate is an early example of an electric slave clock.

In February 2005 a £16 million redevelopment comprising a new planetarium and additional display galleries and educational facilities was started; the ROG reopened on 25 May 2007 with the new 120-seat Peter Harrison Planetarium.[35]