Rockall is a tiny, uninhabited, remote rocky islet in the North Atlantic Ocean. It gives its name to one of the sea areas named in the shipping forecast, provided by the British Meteorological Office and by Met Éireann.

Historically the islet has been referred to in Hebridean fishermen's tales and in Irish folklore, and since the late sixteenth century it has been noted in written records, although it is likely that some northern Atlantic fishing crews knew of the rock before these historical accounts were made. In the twentieth century the location of the islet became a major concern due to oil and fishing rights, spurring continued debate amongst several European nations.

Rockall has also been a point of interest for adventurers and amateur radio operators who variously in the past have landed on or occupied the islet for up to several months, although fewer than twenty individuals have ever been confirmed to have landed on Rockall. 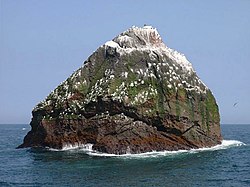 In 1956 the British scientist James Fisher referred to the island as, "the most isolated small rock in the oceans of the world."[1] The neighbouring Hasselwood Rock and several other pinnacles of the surrounding Helen's Reef are however smaller, at half or less the size of Rockall and equally remote. Yet these formations are, while being noted in the Island of Rockall Act 1972, technically not considered islands or points on land per se, as they are often submerged completely, only revealed momentarily under certain types of swell and visible by ocean surface waves.

Though Rockall has long been an isle known to the fishermen of the Hebrides, it was formally annexed to the United Kingdom only in 1972, the Island of Rockall Act 1972 putting the island in Inverness-shire. The right to it and to the fishing rights and mineral rights in the seas around it, the rich Rockall Bank and Trough, and the Rockall Plateau, are disputed by Denmark, Iceland and the Republic of Ireland. 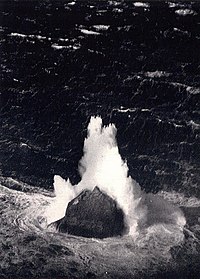 The origin of the name Rockall is uncertain but it has been suggested that it derives from the Gaelic Sgeir Rocail, meaning skerry (or sea rock) of roaring,[2] (although rocail can also be translated as "tearing" or "ripping").[3][4] There may also be an etymological link with the Old Norse 'hrukka'.

The first literary reference to the island, where it is called Rokol, is found in Martin Martin's A Description of the Western isles of Scotland published in 1703. In the book the author gives an account of a voyage to the archipelago of St Kilda and its proximity to Rockall: "... and from it lies Rokol, a small rock sixty leagues to the westward of St. Kilda; the inhabitants of this place call it 'Rokabarra'."[5]

Dutch mapmakers P. Plancius and C. Claesz show an island 'Rookol' northwest of Ireland in the their Map of New France and the Northern Atlantic Ocean (Amsterdam, c. 1594). The name 'Rocabarraigh' is also used in Scottish Gaelic folklore for a mythical rock which is supposed to appear three times, the last being at the end of the world: "Nuair a thig Rocabarra ris, is dual gun tèid an Saoghal a sgrios" (When Rocabarra returns, the world will likely come to be destroyed).

It has most recently been suggested that the name is really Old Norse, and derives from the word *rok (as in Icelandic rok), meaning 'foaming sea', and kollr, meaning 'bald head', a word which appears in other local names in Scandinavian-speaking areas.[6] The Gaelic name would then be derivable from the Norse form.