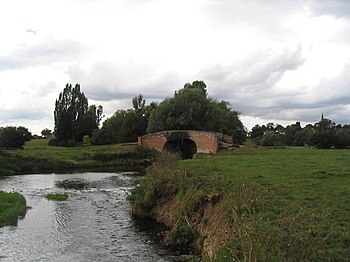 The River Wreake near Rotherby

The River Wreake is a river in Leicestershire, which is ultimately a tributary of the River Soar. From its source at Bescaby, about six miles northeast of Melton Mowbray, the river is known as the River Eye, and it becomes the Wreake below Melton Mowbray. Its length is about 13 miles.

The river is never wide nor fast flowing, although it does flood periodically. It drifts through the gentle rolling countryside of north-eastern Leicestershire by fields bounded by hawthorn hedges. There is very little woodland in the area; what is there is largely man-made in the form of fox coverts. Farming in the district is largely pastoral, with the grassland given over to sheep and cows, the traditional beasts of local agriculture. Stilton and Red Leicester cheeses originally came from the village and farm dairies in the Eye basin.

The Wreake makes its presence felt locally, but its banks are devoid of the intensive development which scars parts of Leicestershire, and its banks are green and pleasant. It is a relatively unknown part of the landscape. Like many rivers it has a long history, much of it unwritten. It is still vital as a water source and drainage route and has a leisure focus for fishermen and those who walk the rights of way that criss-cross its route.

The river has two names: "Eye" in its upper reaches and "Wreake" below. The change is taken to occur at Melton Mowbray or Sysonby just downstream from the town.

The name "Eye" is the Old English ea, meaning just "river", while "Wreake" is Danish in origin, meaning 'twisting' or 'meandering', which describes it well. The river's name is found in that of two villages in Leicestershire: Frisby on the Wreake and Ratcliffe on the Wreake.

The Eye has given its name to the UK's first community radio station 103 The Eye which has been broadcasting to Melton Mowbray and Vale of Belvoir since 2005.

The Eye rises at Bescaby, about six miles northeast of Melton Mowbray. It flows east towards Saltby, where it turns south and flows past Sproxton, Coston and Garthorpe. At Saxby it turns west and flows by Stapleford, Freeby, Wyfordby, Brentingby and Thorpe Arnold.

The river in Melton flows under bridges at Burton Road and Leicester Road, then out to Sysonby, where, at Sysonby Lodge it changes its name to the River Wreake 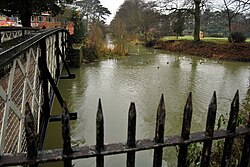 The Eye at Melton Mowbray

The river was canalised in the late 18th century, though after the building of the Syston and Peterborough railway in the mid 19th Century, the canal was disused and fell into ruin. Many of the diversions made to the river in order to make the canal navigable are still visible, especially in the neighbourhood of Hoby, Rotherby, Frisby on the Wreake, Kirby Bellars and Asfordby.

The river has been the centre of human activity for many centuries. To its north-east, at Saltby Heath, are King Lud's Entrenchments, which may date from prehistoric times, although historians debate this. It may be significant that the Entrenchments lie just inside the county boundary with Lincolnshire, which may have been a territorial frontier. The county boundary follows the watershed between the River Eye and River Witham, and is marked by Sewstern Lane or The Drift, a route proposed as an ancient routeway from the southeast of Great Britain northwards.

About six miles south of the river at Melton Mowbray lie the impressive remains of an Iron Age hill fort at Burrough Hill. It is suggested that this may have been the tribal centre for the Corieltauvi people, before in Roman times the tribal centre moved to Ratae Corieltauvorum (Leicester). 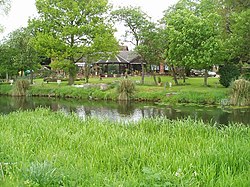 Nine of the villages bordering the river have Danish names. The rest are English. Stapleford means 'Post ford' (a ford marked by posts)[1] and indicates that the lanes around the Eye were in use twelve hundred years or so ago.

Melton Mowbray appears to have become the Wreake basin's trading centre in Anglo-Saxon times. Its market probably pre-dates the Norman conquest and is one of the few listed in the Domesday Book (1086). Melton continued as the main trading centre in the area throughout the Middle Ages, up to the present day.

The Eye valley was used by the Oakham Canal when it was built early in the nineteenth century. The stretch of the river from Stapleford to Sysonby (about six miles) was canalised. There are a few sparse remains of the canal, although the river has largely reverted to its natural state. In 1844 the Midland Railway built the Syston and Peterborough Railway alongside the canal. It had to buy out the canal company as part of the agreement to build the railway. The Midland Railway allowed the canal to fall into disrepair because it was the major competitor to its new route.

The Wreake is graded by the Environment Agency as "B" quality, which is excellent for a Midlands river. Biotic index surveys report mayfly and stonefly nymphs, caddis fly larvae, dragonfly and damselfly nymphs and crayfish. Among the fish are Perch, Chubb, Pike, Minnows, Miller's Thumb, and Trout. Otters are starting to repopulate the Wreake in its quieter stretches.