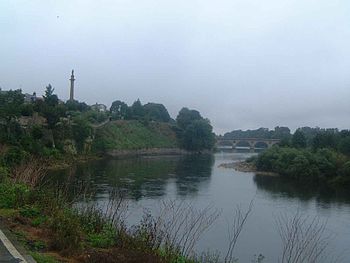 The Tweed at Coldstream 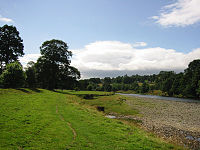 The Tweed at Abbotsford, near Melrose 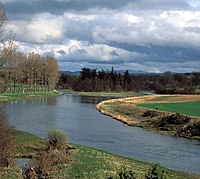 The Tweed from Mertoun House near St Boswells

The River Tweed, or Tweed Water is 97 miles long and flows primarily through the counties of Peebles, Selkirk, Roxburgh and Berwick before entering the liberties of Berwick-upon-Tweed in Northumberland, its tidal waters dividing that town from Tweedmouth on the south bank.

The Tweed rises on Tweedsmuir at Tweed's Well near where the Clyde, draining northwest, and the Annan draining south also rise. "Annan, Tweed and Clyde rise oot the ae hillside" as the local saying has it.

The Tweed drains a broad region; all the north-eastern part of the Middle Shires, forming a luxuriant pastoral region in the four shires and in northern Northumberland. The Tweed is one of the great salmon rivers of Britain too.

Major towns through which the Tweed flows include Peebles, Galashiels, Melrose, Kelso, Coldstream and Berwick-upon-Tweed, where it flows into the North Sea.

It rises on Tweedsmuir in Peeblesshire and begins a twisting course through that shire. Peebleshire's alternative name is "Tweeddale" after its river. The river flows through Peebles and Innerleithen; there are no other sizeable towns on its upper course.

Having spent its first 36 miles, a third of its course in Tweeddale, the Tweed enters Selkirkshire and spends a few miles watering the north of that county, accepting the waters of the Gala Water a little below Galashiels.

The Tweed then enters northern Roxburghshire and flows for 26 miles in that shire, serving as a boundary river for some twelve miles at either end of this reach. Within Roxburghshire the Tweed is joined by the waters of the Bowden and at Kelso the River Teviot. The Allan and the Eden Water join its swelling waters too in Roxburghshire. The Tweed passes the site of Old Roxburgh, the unfortunate burgh which gave its name to the shire before the fratricidal wars of the Middle Ages destroyed it. Henry of Huntingdon reports that in his age, the twelfth century, the Tweed this high up marked the boundary between the kingdoms of England and Scotland and Roxburgh was a border town, though at peace in his day.

Between Birgham (Berwickshire) and Carham (Northumberland) the Tweed, by now a broad and noble stream, forms the boundary river between Berwickshire and Northumberland. So it continues for many miles, becoming tidal at the Union Bridge below Horncliffe and above Paxton House and soon enters the Liberties of Berwick, where it divides Berwick from Tweedmouth and thereafter enters the North Sea.

Catchment of the River Tweed 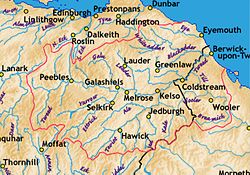 Catchment and tributaries of the River Tweed

The Tweed valley is interesting area when it comes to looking at the glacial history of Britain. The valley floor on which the river currently flows is a drumlin field and is the relic of a paleo ice stream that flowed through the area during the last Ice Age. 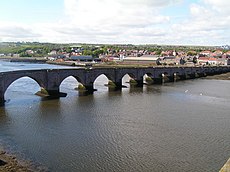