From Wikishire
Revision as of 23:32, 22 January 2012 by RB (Talk | contribs) (Created page with 'The Stour near Ettington Park The '''River Stour''' is a river in Warwickshire. It is a tributary of…')
(diff) ← Older revision | Latest revision (diff) | Newer revision → (diff)
Jump to: navigation, search 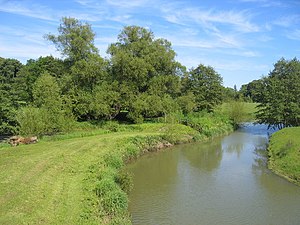 The River Stour is a river in Warwickshire. It is a tributary of the Warwickshire Avon, into which it discharges its waters below Stratford-upon-Avon. It is one of several rivers in southern Britain knon as the Stour.

The source of the River Stour is in Traitors Ford, near Wiggington Heath. It flows west to Stourton then north to the town of Shipston-on-Stour. A little to the north it abosorbs the waters of the River Tus. Downstream it also gives its name to Newbold on Stour and Preston on Stour, then Atherstone on Stour.

Untli Atherstone, the A3400 road, Shipston Road, roughly follows the course of the river.

The Stour joins the Avon at Clifford Chambers, a little southwest of Stratford.