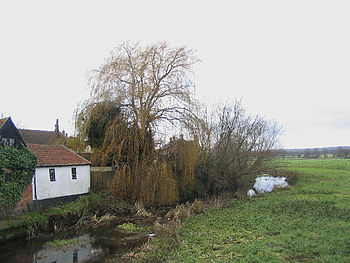 The Roding at Abridge 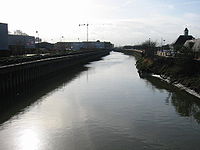 The Roding as Barking Creek

The River Roding is a river of Essex which on its course witnesses the great contrasts of that county. It rises near Dunmow, and flows through the Essex countryside, but at its end it forms Barking Creek as it reaches the River Thames in the heart of the industrialised or post-industrial landcape of the East End.

The river leaves Dunmow and passes through a group of villages in Essex known collectively as "the Rodings", as they all end with the suffix 'Roding', notwithstanding that some are a mile or more from the river itself. After Chipping Ongar, the river flows under the M25 motorway by Passingford Bridge and Abridge.

The river then runs past Loughton and between Chigwell and Woodford Green where the Roding Valley Meadows make up the largest surviving area of traditionally managed river-valley habitat in Essex. This nature reserve consists of unimproved wet and dry hay meadows, rich with flora and fauna and bounded by thick hedgerows, scrubland, secondary woodland and tree plantation.[1] The meadows stretch down to the M11 motorway and Roding Valley tube station is situated close to the area, although Debden, Loughton, or Buckhurst Hill are better placed for a visit.

Redbridge takes its name from a crossing of the river which then passes through Ilford and Barking. The River Roding through Ilford project is a government backed scheme to improve amenities along this stretch of the river.[2] After Barking the tidal section is known as Barking Creek, which flows into the Thames at Creekmouth.

The river marks several ancient parish bounadries. In its lower reaches it divides Little Ilford from Ilford (formerly "Great Ilford"); the name Ilford is from Ilefort, meaning "ford on the River Hyle", for he Hyle was a mediaeval name for the Roding.