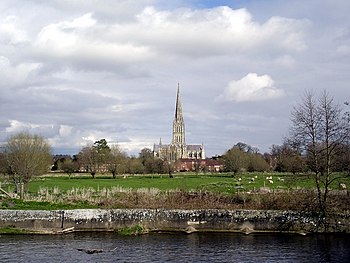 Salisbury Cathedral seen from the banks of the Nadder

The River Nadder is one of the five rivers which unite in the meadows of Salisbury, beneath the gaze of its cathedral, in Wiltshire.

The name of the river is Old English: næddre means "Snake".

This is a chalk stream, a distinctive, rare type of river found in the southern counties, and much sought after by fly fishermen because of its clear waters and abundance of brown trout. It is one of the main tributaries of the Salisbury Avon, rising from a number of springs and small streams at Donhead St Mary in southern Wiltshire, each headwater rising close by the border with Dorset.

From its origin, the infant Nadder flows gently northwards to the estate of Wardour Castle, where it is swollen by the waters of the River Sem, and from this point it carves the gentle Vale of Wardour all the way eastwards towards Wilton.

The Nadder in the Vale of Wardour flows north-east to Tisbury, then eastwards towards the mediæval cathedral city of Salisbury, through, Upper Chicksgrove, Lower Chicksgrove, Barford St Martin, and Burcombe before reaching Wilton.

AT Wilton the river passes through the grounds of Wilton House and is joined by the River Wylye.

After passing Quidhampton and Harnham, the Nadder enters Salisbury and joins the Avon near Salisbury Cathedral, the divided streams of the rivers that join here forming the famous water meadows by which the city was founded.