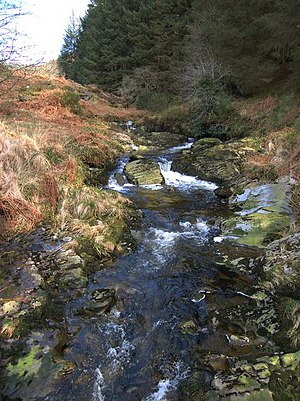 The River Mynach is a small river in Cardiganshire, which runs into the River Rheidol above Aberystwyth.

The Mynach is best known for the famous Mynach Falls in the village of Devil's Bridge (Pontarfynach), where the river plunges 300 feet into the gorge of the River Rheidol. The same village is famous for the three bridges built one on top of the other; the lowest of the three said to be built by the devil (hence the name Devil's Bridge), but most probably built by the monks of Strata Florida.

It may be the monks who give the river its name; the Welsh Mynach means "Monk".