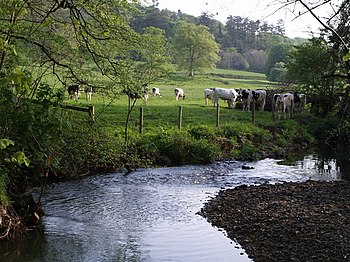 Cattle beside the Lew water south of Lewtrenchard

The River Lew is a little Devon river which rises on the north-west corner of Dartmoor, near Sourton, and flows westwards and somewhat south, through the Lew Valley past Lewtrenchard and south of Lewdown before joining the River Lyd near Marystow.

The river has in earlier times also been known as 'Lew Water' (the name Ekwall uses).[1] It is one of two rivers in Devon of the same name; the other River Lew is a tributary of the River Torridge, and at their nearest point the two rivers are not much more than six miles apart. Ekwall derives the name of both rivers from the British language Lliw, which in modern Welsh means 'colour'.[1]

The Anglo-Saxon Chronicle records a battle in 825 in which Devonshire forces loyal to Egbert of Wessex defeated the Cornish at Gafulford; and this is thought to be Galford on the banks of this river, though some translations render it as Camelford, some twenty miles further west.