From Wikishire
Revision as of 23:01, 28 September 2016 by RB (Talk | contribs) (Created page with "The River Inny {{county|Longford}} The '''River Inny''' is a river within the Shannon River Basin in Ireland, and which flows throu...")
(diff) ← Older revision | Latest revision (diff) | Newer revision → (diff)
Jump to: navigation, search 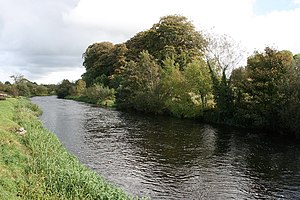 The River Inny is a river within the Shannon River Basin in Ireland, and which flows through for forms the border of four counties on its course. The Inny is 40 miles in length from its source to its mouth in Lough Ree.[1]

The river is known in Irish as An Eithne and it is said that the name is from the mythological figure Ethniu.

The Inny begins as a stream on Patrickstown Hill, one of the peaks which form the Loughcrew complex of megalithic tombs, near Oldcastle in Meath and marks the boundary between Meath and County Cavan for about four miles before it enters Lough Sheelin in Cavan. From Lough Sheelin it forms the boundary between Westmeath and Cavan, and flows under the bridge of Finea into Lough Kinale where counties Cavan and Westmeath meet County Longford.

From this meeting, the river forms much of the boundary between Longford and Westmeath but near Streete it enters Westmeath and flows into Lough Derravaragh. It then flows near the village of Ballinalack and crosses into County Longford near Abbeyshrule, where the Whitworth aqueduct suspends the Royal Canal above the river, and pumps supply the canal with water.

At nearby Tenelick, the mythological Princess Eithne drowned in the rapids, giving her name to the river.[2] The rapids have powered two mills here for many years. It continues past Newcastle House to Ballymahon, the largest town located on the Inny. It again forms the county line between Longford and Westmeath, finally running westwards to discharge its waters into Lough Ree, which covers the boundary with County Roscommon. The waters leaving the lough are the River Shannon 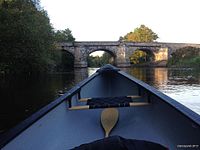 The Inny River at Newcastle Bridge