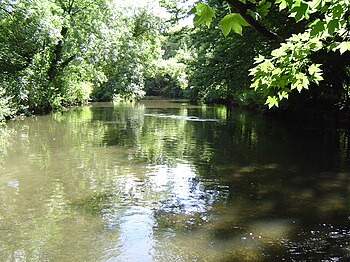 The Crane in Crane Park, Whitton

The River Crane is a river in western Middlesex which rises in Hayes and ultimately joins the River Thames at Isleworth. It has given a name and a neauty to Crane Park in Whitton and all along its course it provides a welcome break in the landscape from the surrounding, relentless suburbs.

Its name is a back-formation from Cranford, Middlesex; formerly it was called the Cranford River.

The River Crane is 8½ miles long. Its source is taken to be a point south of North Hyde Road in Hayes, Middlesex, from where its course is generally in a southerly, if near semi-circular, direction, before it joins the River Thames at Isleworth.

From greeting the Duke of Northumberland’s River, the Crane, which has been flowing in a south-westerly direction, passes through Crane Park in Whitton). Crane Park was once the site of the Hounslow Powder Mills which were built in the 16th century and continued to make gunpowder until 1927. The mills have disappeared, but the "Shot Tower" still stands nearby.[1] The large millpool on an island above the mills has been turned into a nature reserve. The river then turns to the north-east to join the Thames at Isleworth, throwing off the second section of the Duke's River near Kneller Gardens in Twickenham. The Crane is tidal for a short distance before its confluence with the Thames.

When extending the Piccadilly Line from Hounslow West to Heathrow Airport, the bogginess of the ground beneath the river prevented engineers tunnelling below it, so the line rises from its tunnels on either side to cross over it. 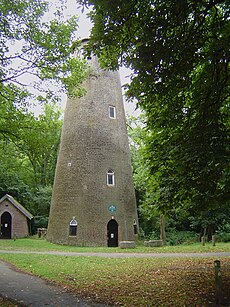 The Shot Tower in Crane Park

The principal tributary of the river is the Yeading Brook, formerly known as "The River Fishbourne". The Yeading Brook begins its course considerably further north in the high ground between the north western London towns of Pinner and Harrow.

The main tributaries of the Crane are:

There are at least ten other streams which join the Crane on its course.