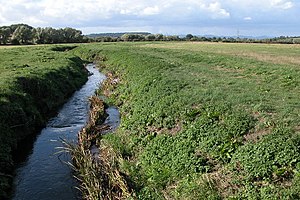 The River Chelt near Wainlode

The River Chelt is a river fourteen miles long in Gloucestershire. It rises in the Cotswolds and ultimately becomes a tributary of Britain's largest river, the River Severn, which it joins by Wainlodes Hill.

The Chelt flows through the western edge of the Cotswolds and the town of Cheltenham, before its confluence with the River Severn at Wainlodes Hill.[1][2]

There were a number of mills along the length of the river, the highest being in Charlton Kings and the lowest at Norton where the river passes under the present A38.