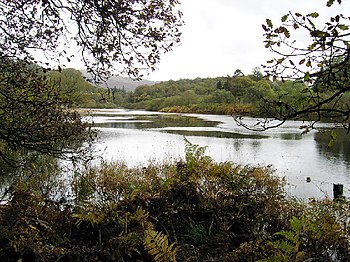 The Brathay in spate near Clappersgate 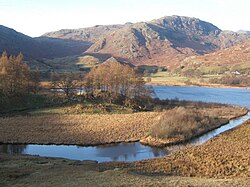 The Brathay is a river on the border of Lancashire with Westmorland, within the Lake District. Its name comes from Old Norse and means broad river.

The Brathay rises at a point 1,289 feet above sea level near the Three shire stone, where Cumberland, Lancashire and Westmorland meet at the highest point of Wrynose Pass (NY277028). Its drainage basin includes the northern flanks of Wetherlam, Great Carrs and others of the Furness Fells of Lancashire, as well as a substantial area of the Langdale Fells of Westmorland.

The small stream at the top of Wrynose quickly gathers pace as it descends some 930 feet in a distance of about two miles, running roughly parallel to, and south of, the Wrynose Pass road.

The Brathay drains Elter Water and flows for about half a mile in a south-easterly direction to Skelwith Force where it descends 15 feet. It then passes under the A593 road at Skelwith Bridge, and continues in an easterly direction, to Clappersgate. After another quarter of a mile it joins the River Rothay close to Croft Lodge south-west of Ambleside, the united waters at once flowing into the northern end of Windermere.

The stretches of the Brathay around Clappersgate and Skelwith Force are popular with canoeists.[1]

For its entire length the River Brathay forms part of the boundary between two counties: Lancashire to the south and Westmorland to the north, which boundary continues through Windermere.