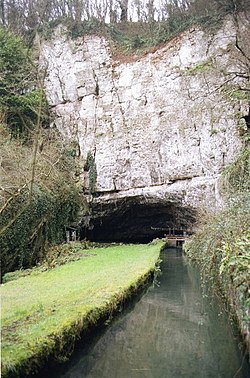 The Axe emerges from the Wookey Hole Caves

The River Axe is a river in Somerset. It rises from the ground at Wookey Hole Caves in the Mendip Hills of that county and runs through a V-shaped valley, eventually reaching the sea in Weston Bay on the Bristol Channel.

The geology of the area is limestone and the water reaches Wookey Hole in a series of underground channels that have eroded through the soluble limestone.

The river was navigable from the Middle Ages until 1915, and it was used by merchants trading overseas.

The name Axe is a version of the ancient Celtic word for water,[1] found in the many rivers bearing the name "Esk" and similar names. 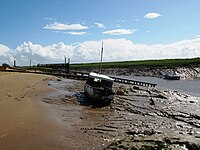 The Axe estuary at Uphill

From Wookey Hole village the river flows through a limestone gorge and then west through the village of Wookey.

At Wookey the river splits into two channels. The Lower River Axe runs past to the south of the village west towards Henton and then onto Panborough Moor where it joins a series of rhynes and drains supplying water to the wetland in the area. The Lower River Axe then runs north along the west most edge of Knowle Moor whilst the main River Axe continues west through the same moor. The two channels meet again on the boundary between Knowle and Panborough Moors.

The river continues northwest past Wedmore Moor and through Oxmoor, Stoke Moor and Monk Moor. The river passes through the settlement of Lower Weare and on to the south of Loxton. From this point until it passes between Uphill Cliff and Brean Down, then reaches the coast at Weston Bay.

Tributaries of the Axe include three rivers called Yeo: the Cheddar Yeo, the Mark Yeo and the Lox Yeo.

The lower reaches of the Axe have a history of navigation from the harbour at Uphill through to the settlement of Weare. The current tidal limit of the Axe is the sluice gates at Bleadon and Brean Cross.

In the Middle Ages overseas trade was carried out from the port of Rackley, which is now north of the river as the course has been diverted. Rackley is now a farm below Crook Peak and west of Axbridge, which also had wharves.

In the 14th century a French ship sailed up the river and by 1388 Thomas Tanner from Wells used Rackley to export cloth and corn to Portugal, and received iron and salt in exchange. Later slate was imported through this route and it may have still be possible to trade through Rackley until the act of 1915 authorising the drainage of the Axe and installation of the flood gate at Bleadon.[2] Bleadon had been a small port, sometimes known as Lympsham Wharf, for many years, with the arrival of the railway in 1841 making this the furthest navigable point. It was last used by the ketch Democrat in 1942.[3]

A series of 11 watermills were powered by the river but the only one which remains is at Burcott.