Difference between revisions of "Rape of Lewes" 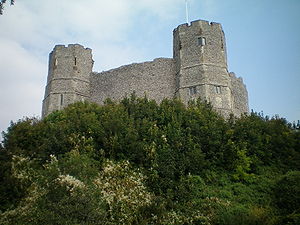 The keep of Lewes Castle, once the administrative centre of the Rape

The Rape of Lewes is one of the rapes of Sussex, the traditional divisions unique to that county. It is the most populous of the rapes, with a population of 429,744.

The rape of Bramber lies to its west and the rape of Pevensey lies to its east. The north the rape is bounded by the county of Surrey and to the south by the English Channel. The rape of Lewes includes the city of Brighton and Hove in its south-west corner, as well as the towns of Burgess Hill, Haywards Heath, Lewes, Newhaven and Seaford. At 814 ft tall, its highest point is Ditchling Beacon on the South Downs.

According to John Morris the boundary between the Rapes of Lewes and Pevensey, which cuts through the middle of Lewes, probably pre-dates the founding of the town of Lewes in the late 9th or early 10th century. If one boundary had existed so early then it is quite possible that other boundaries also existed, and the Rape of Lewes, or its precursor, may have existed at this time.[1] Ditchling may have been an important regional centre for a large part of central Sussex between the Rivers Adur and Ouse until the founding of Lewes in the 9th century.[2] Another possibility is that the rapes may derive from the system of fortifications, or burhs (boroughs) devised by Alfred the Great in the late ninth century to defeat the Vikings. The Rapes, or similar predecessors may have been created for the purpose of maintaining these early boroughs, which included Lewes.

At the time of the Norman Conquest in 1066, the Rape of Lewes seems to have included the land between the Rivers Adur and Ouse. By the time of the Domesday Survey was made in 1086 a large strip of land extending to the River Adur on the west, and running from north to south, seems to have been cut off from Warenne's territory and given to William de Braose as part of his rape of Bramber. Another piece of land in the north-east of the original rape of Lewes, the hundred of East Grinstead, was given to the Count of Mortain. William de Warenne was compensated for these land losses by a grant of manors in Norfolk, Suffolk, and Essex, which are described in Domesday Book as 'of the exchange of Lewes' or 'of the castellany of Lewes' and in the time of Henry II as the Earl of Warenne's 'new land'.[3]

The rape is divided into the following hundreds:

As well as Fishergate, which is shared with the rape of Bramber.