Quorn, also known as Quorndon, is an upmarket village in Leicestershire, close by the university town of Loughborough. It is one of the most sought after places to live in the area, known for its luxurious lifestyle and surroundings.

The original name of the village is 'Quarndon'. This was shortened to Quorn in 1889, to avoid postal difficulties owing to its similarity to the name of another village, Quarndon, in neighbouring Derbyshire.[1]

The name 'Quarndon' is thought to be derived from the Old English cweorndun, meaning "Quern Hill", presumably because millstones or quern stones could be quarried from the hill, as indeed they have been since Roman times or earlier.

The quarrying of stone in Quorn began at a very early age at Buddon Wood, on the edge of the parish. Granite millstones were quarried in the early Iron Age, and under the Romans stone was quarried for building in Leicester. Some of the larger millstones can still be seen in the area, however these days they are either used as garden ornaments, or worked into seats or slabs.

Quorn Hall, off Meynell Road on the eastern edge of the village, was built for the Farnham family in about 1680.[3] It became the home of renowned fox hunter Hugo Meynell in 1753. He established his pack of hounds there, where it continued under later masters until 1905, thus giving a name to the famous Quorn Hunt.[4] Three Royal Navy ships have been named HMS Quorn after the hunt.[5] 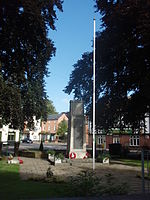 Quorn Camp was established on the grounds of Quorn House during Second World War. It was used as a Prisoner of war camp[6] and was also host to a number of the United States Army 82nd Airborne Division's 505th Parachute Infantry Regiment.[7] These paratroopers were involved in liberating the town of Sainte-Mère-Église, in Normandy, France, on the morning of D-Day and included Pvt. John Marvin Steele who famously became caught on the town's church spire.[8] This incident is today commemorated with a dummy paratrooper and parachute attached to the church in Sainte-Mère-Église.

A number of American veterans come back to Quorn, particularly every tenth anniversary of the D-Day landings, to remember their time in Quorn and their comrades who did not return.[9]

There is a plaque commemorating the lost US servicemen in Quorn's Memorial Gardens, upon which a poppy wreath is placed each year on Remembrance Sunday. There is also an avenue of lime trees in Stafford Orchard (the village park) in remembrance of those American soldiers that died, together with a plaque.[7] 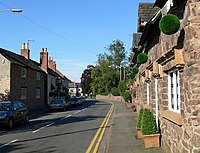 Quorn is built around the old A6 road which runs through the centre of the village. On 28 October 1991 a dual carriageway bypass opened taking the A6 away to the north-eastern edge of the village.[10] 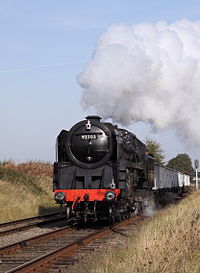 The village has a train station called "Quorn and Woodhouse", shared with the neighbouring hamlet of Woodhouse, which was on the national Great Central Railway network. The station is now on the preserved Great Central Steam Railway. Numerous royal visitors have disembarked at the station to take part in the Quorn Hunt, including the Prince of Wales (later Kind Edward VIII).[11] As well as being a site of historical and cultural interest throughout the year, the station hosts a fireworks display on the Bonfire weekend.

Sarson Street, running adjacent to Rawlins Community College, features many 19th Century terraced cottages, formerly those of framework knitters. Framework knitting was a major local industry until the onset of major mechanisation, and the cottages along this road display certain features typical of such an activity. Large windows for example were intended to allow in the necessary amount of light by which to work.

M. Wright & Sons Ltd have been manufacturing fabrics at Quorn Mill, on Leicester Road, since 1870. Originally producing fabrics for the footwear and corset trades, the factory now produces high technology textiles for various industries including military, aerospace and leisure.[12]

"The Banks" area of the village is an ornate paved area with seating, designed to resemble the letter 'Q' when seen from the air.

The village prides itself on its green spaces, and more evidence of this can be seen with the opposition to proposed development at Caves field. This is a large cricket pitch with a pavilion near the centre of Quorn, which was the focus of interest from a housing development company. Objection was widespread, not only at the prospect of losing the cricket field but also due to the threat to a neighbouring wetland ecosystem, considered valuable by environmentalists and the village population.

In the past few years, efforts have been made to cater for the local young people. These have resulted in a half pipe being built next to the basketball court on the park, and a green shelter erected on the same site. The large park, with its shaded area by the stream, large football pitch and half pipe now appeals to people of all ages. Examples of how the park contributes to the village can be seen at the large and successful Mayday fete, as well as the local pub football matches occasionally held there. 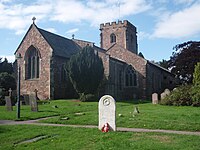 The Church of St Bartholomew and Farnham Chapel is a Grade I listed building.[13]