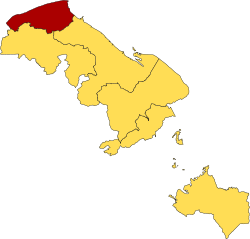 The Prestatyn Hundred is one of the hundreds of Flintshire, in the north of the county. It is named after the town of Prestatyn, which it contains. It is bounded by the Irish Sea to the north; by Rhuddlan Hundred to the south-west; and by Coleshill Hundred to the south-east. It is ranked third in population behind Mold and Coleshill hundreds, with a population of 49,685.