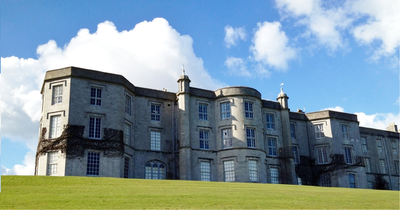 Plas Newydd, by Llanfairpwllgwyngyllgogerychwyrndrobwllllantysiliogogogoch on Anglesey, is the country seat of the Marquess of Anglesey. The family's former principal seat at Beaudesert in Staffordshire was sold and demolished in the 1930s.

The house is stands on the bank of the Menai Strait and has splendid views of Snowdonia across the water. 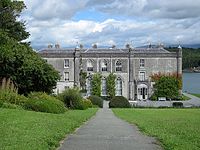 Plas Newydd, with the Menai Strait behind

The estate can be traced to the 15th century when it was held by the Griffiths family, owners of a large estate in nearby Bangor. The house originated in the 14th century; the earliest section is the Great Hall with symmetrical entrances at either end. From there the house was expanded towards the Menai Strait and two towers were added.

The building was greatly altered in the 18th century by James Wyatt who refaced it, blended the towers into the building front, and substantially made it into the building that stands today. At the end of the 19th century, Henry Paget, 5th Marquess of Anglesey, had the chapel turned into a theatre. Plays were put on regularly, with the Marquess often taking the lead role himself. After the 6th Marquess inherited the estate, all the furniture was sold to help restore the solvency of the family after the 5th Marquess' huge spending. The family also sold off their main home and their London house and moved into Plas Newydd permanently. The 6th Marquess made the final big changes to the house by removing the crenellations from the roof, disposing of the theatre, knocking three servants' rooms together to make the dining room and covering over a courtyard to provide a roof for the servants.

The house has been owned by the National Trust since 1976. There are now a tearoom and a second-hand bookshop, and historical cruises along the Menai start from the house.

In 1949 the training ship HMS Conway was moored in the Menai Straits near Plas Newydd. The ship was supported from the small dock in the grounds of the estate. Following the loss of the ship in 1953, the school built temporary facilities in the grounds near the current reception centre. These were used for teaching and housing the senior cadets. The younger cadets were accommodated in the eastern wing of the house. The former stables building was used for teacher accommodation, classrooms and a laboratory. These arrangements continued until 1964 when the entire school moved into a new purpose-built building in the grounds of the estate. The school was closed in 1974 although the school's building still stands.

The house contains Rex Whistler’s largest painting, measuring 58 feet by 12 feet; the largest single canvas in Britain. There is also an exhibition with many examples of Whistler's work.