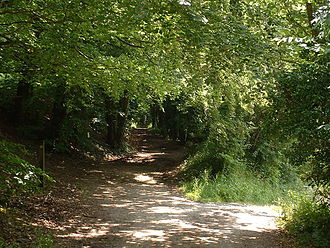 The Pilgrims' Way near Westwell, Kent

The Pilgrims' Way is a long-distance footpath between Winchester in Hampshire and Canterbury in Kent, passing along the ridge of the North Downs in Surrey and Kent. The route is popularly believed locally to be a Mediæval pilgrim route between Winchester and the shrine of Thomas Becket in Canterbury, but the reality is more modern, prosaic and eccentric.

The path was first defined and named by an officer of the Ordnance Survey in the nineteenth century and has become established in the public imagination since then.

There may have been ancient routes along the approximate course of the way; certainly prehistoric remains are found here, though whether as evidence of travel or just of settlement is another matter. If there was such a route, it is a course dictated by the natural geography, taking advantage of the contours, avoiding the sticky clay of the land below but also the thinner, overlying "clay with flints" of the summits.[1] In places a coexisting ridgeway and terrace way can be identified; the route followed would have varied with the season, but it would not drop below the upper line of cultivation.[2][3] The putative trackway would have run the entire length of the North Downs, leading to and from Folkestone.

The idea of an ancient route along the Downs is a matter of scholarly debate: some have tracked the tracks in great detail according to an interpretation of archaeological finds, whilst other archaeologists dismiss the idea of "prehistoric motorways" along the chalk ridges as fantasy.

Map of the Pilgrims Way near Titsey, Surrey, on the brow of the North Downs

The idea of the Pilgrims' Way is the invention of two men of the mid-19th century: the appropriately named Albert Way from Kent, published his theory that a series of paths in the North Downs had been part of a route in the Middle Ages for pilgrims travelling between the shrine of St Swithun in Winchester and that of Thomas Becket in Canterbury; Becket was slain in Canterbury Cathdral in 1170 and his shrine is known to be one of the most popular destinations for pilgrimage in the Middle Ages. Way took as evidence a few place-names near his footpaths and then joined the sections of path to create his 'pilgrims' way'. In the 1860s, Captain Edward Renouard James of the Ordnance Survey came across Albert Way's work and, taking it uncritically, he set to work mapping the pilgrims' way with enthusiasm. In 1871 Captain James published a booklet[4] promoting the way and even claimed that John Bunyan walked it and based his Pilgrim's Progress on the places on the way (notwithstanding that Bunyan apparently never visited Surrey in his life and as a Puritan would hardly have engaged in such Romish practices).[5] The seal of approval by the Ordnance Survey however was enough to establish "the Pilgrims' Way" and the whole mythology behind it.

There is not a shred of evidence that even a single Mediæval pilgrim ever walked the 'Pilgrims' Way'.[6] The route as shown on modern maps is not only unsuitable for the mass movement of travellers but has also left few traces of their activity.[7]

The official history of the Ordnance Survey acknowledges the "enduring archaeological blunder", blaming the enthusiasm for history of the then Director, General Sir Henry James.[8] Together, romantically inclined authors have succeeded in creating a "a fable of...modern origin" to explain the existence of the Way.[9] Endless guidebooks have been published since the nineteenth century, and still are, accepting uncritically the idea that the Pilgrims' Way was an ancient pilgrimage route.

In 1904 the poet Hilaire Belloc, a Roman Catholic with mediaevalist leanings, published a poem The Old Road, describing an ancient trackway ('the Pilgrims' Road') running between Winchester and Canterbury. Several works have followed Belloc's poem as an authoritative guide.

In 1931 a plaque was erected at St Catherine's Ferry in Guildford stating "You who pass by … are treading the path trod by Geoffrey Chaucer's Canterbury pilgrims". The plaque does not go on to explain why pilgrims who set off from Southwark for Canterbury would head in the opposite direction, to Guildford, unless the beer at the Tabard was stronger than they thought.

The Pilgrims' Way is at the centre of the Powell and Pressburger film A Canterbury Tale, with the camera panning along a map of the route at the start of the film.[10]

On the Pilgrims' Way near Trottiscliffe, Kent

The route of the Pilgrim's Way is defined by the Ordnance Survey, by local authorities and supported by the Pilgrims' Way Association.

From Winchester the Pilgrims' Way runs north-eastwards to Farnham in Surrey.

The route in Surrey begins in earnest in Farnham. It follows the North Downs Way, south of the ridge of the Hog's Back to Guildford, crossing the River Wey south of the town (Ferry Lane). From here eastwards it is found parallel to the North Downs Way to the south, over St Martha's Hill and down into the Tillingbourne Valley to Shere and Gomshall, then north again to the heights of the North Downs, where again it accompanies the North Downs Way all the way into Kent. It runs north of Dorking, Reigate, Merstham and Limpsfield, to Westerham in Kent.

At Westerham the way passes a little below the county top and on parallel to the North Downs Way, much of the time on minor roads rather than footpaths, by Otford and Kemsing. The route rejoins the North Downs Way at Wrotham, and follows it or runs close and parallel for the whole way to Canterbury.

The route mostly provides fairly easy walking through woods, over chalk grassland, minor roads and, especially in Kent, through orchards and farmland.

The North Downs Way follows the crest of the southern escarpment of the North Downs or footpaths and tracks along their lower slopes while the Pilgrim's Way often keeps to the spingline.

There are views over the Weald to the South Downs and several steepish ascents where the ridge is cut by valleys, notably those of the Mole at Box Hill, the Darent at Otford, the Medway at Rochester, and the Stour near Wye.

The route links with the South Downs Way at Winchester.