Penkridge is a small market town in Staffordshire, a village to many locally but it has a long history as an ecclesiastical and commercial centre. Its main distinction in the Middle Ages was as the site of an important collegiate church, which still dominates the skyline. It has continued to prosper mainly because of its favourable location on regional transport links.

Penkridge is in the south of the county, between Stafford and Wolverhampton, approximately ten miles to the south. The River Penk flows through it. 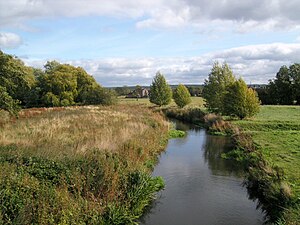 The River Penk from Bull Bridge

The popular imagination holds that Penkridge is named after the River Penk, its river, though the reverse is the case: the river name is a back-formation from 'Penkridge'.

The town has an ancient name, from the British language. The Romans had a fort here named Pennocrucium,[1] which must echo its original British name, and from that British language name, resumed after the Romans fled Britain, came the English name. The original name name may be penn-crug, meaning "the head (or end) of the ridge", or "chief hill or mound". In very early times of English settlement the inhabitants of the district were known as the Pencersæte. In 958, a charter uses the form Pencric for the village,[2] which would be pronounced "penk-rich". 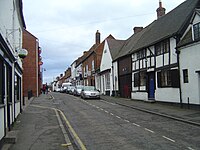 Penkridge's local market has been revived and is held on Wednesdays and Saturdays. The substantial tower of the Church of St Michael and All Angels on the western edge of town, parts of which date back to the early thirteenth century, is visible even to passing road and rail travelers. A smaller Methodist church is located on the main A449 route through the town, and there are numerous buildings dating from the fifteenth and sixteenth centuries. Penkridge has its own historic stocks and cells still to be seen in the town centre, though not used.

The town has several pubs and numerous sports clubs.

On the last Friday in November, for one night, the village centre used to close to traffic to allow a Victorian Night & Christmas Market to take place, in 2010 this event moved to the Market site where it has expanded to include over 70 stalls and a funfair.

The town of Penkridge dates back at least to the early Middle Ages, when the area was part of Mercia, although the foundation date is unknown. King Edgar in 958, described it as a "famous place",[3] so it was already of importance by then. In the Tudor period, it was claimed that the founder of the collegiate church of St Michael at Penkridge was King Eadred (946-55), King Edgar's uncle,[4] which seems plausible.

[[File:St. Michael's and All Angels church in Penkridge - geograph.org.uk - 1435423.jpg|right|thumb|200px|St Michael and All Angels] Penkridge's church was of central importance to the town from Anglo-Saxon times and the Norman Conquest did not change this. It was of a special status.

The collegiate church was the most important local institution for most of Penkridge's history: economically powerful and architecturally dominant. All the people of the parish had to be buried there, at considerable cost, so it was where the local magnates installed their memorials. Its area of jurisdiction defined Penkridge parish, which was also the main unit of local government until late Victorian times.

At the Reformation came the Dissolution of the Monasteries under Henry VIII. The College of St Michael was not threatened at first, as it was not a monastery, but King Edward VI was more radical and St Michael's, grown rich on selling masses for the dead, was stripped, the chantries closed and its lands sold. In 1548 the first Vicar of Penkridge, Thomas Bolt of Stafford, was appointed on £16 a year, with an assistant on £8; a far cry form the wealth and corruption of the Archbishop's mediaeval church.[6]

The grant of Penkridge manor to the Archbishop of Dublin included the right to hold an annual fair. This right was upheld for the Blund family by Edward I in 1278 and by Edward II in 1312.[7] It began as a general fair but developed into a horse fair by the late 16th century.

Henry III granted Andrew le Blund a weekly market in 1244, despite a challenge by the burgesses of Stafford, who feared competition. After 1500 the market declined, expired and was revived several times. The market place, still so-named but no longer used, was at the opposite end of the town from the church. The modern market is held on the livestock auction site close to Bull Bridge.

John Dudley, Earl of Warwick, a key figure in Edward VI's regency council, got control of Penkridge manor in 1539 by foreclosing on a debt owed by its owners, the Willoughby de Broke family. With the Deanery Manor and Tedesley Hay, he became the most important landowner in the area. However his fall was swifter even than his rise; he was beheaded in 1553 for having supported Lady Jane Grey, the nine days' queen.

In 1585 the manor was bought by Sir Edward Littleton.

The Grevilles were powerful regionally and nationally. Robert Greville was a leading parliamentarian and a Puritan, and when the Civil War broke out, he took command of a parliamentary army in the Midlands and was killed during the siege of Lichfield Cathedral in 1643. He was succeeded by Francis Greville, 3rd Baron Brooke.

The village's other landowners, the Littletons, were instinctively loyalist. Sir Edward Littleton was made a Baronet by Charles I in 1627. In May 1645 during the Civil War, royalist troops quartered in Penkridge were expelled by small parliamentary force after a brief skirmish. Littleton's estates were sequestrated but he was able to recover them on payment of £1347. The Littletons' holdings were thus preserved and they found themselves in favour again after the restoration of Charles II in 1660. Despite the revolutionary turmoil, the real situation in Penkridge was little changed. 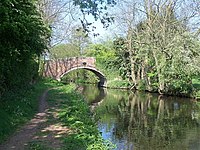 Bridge 88 on the Staffordshire and Worcestershire Canal 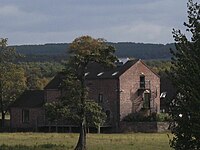 The Roller Mill, used for rolling iron in the early 19th century

Penkridge owed much to its transport links, which steadily improved. The main Stafford-Wolverhampton route, now the A449 road was turnpiked under an Act of 1760. Bull Bridge, carrying the road over the Penk, was rebuilt in 1796 and widened in 1822. The improved road attracted more traffic: by 1818 there were stops by coaches on the London - Manchester, Birmingham - Manchester and Birmingham - Liverpool routes. The Staffordshire and Worcestershire Canal, opened in 1772, running straight through the parish and the township from north to south, with wharves at Spread Eagle (later called Gailey) and at Penkridge. In 1837, the Grand Junction Railway was opened. It cut through Penkridge on its west side, where Penkridge station was built, and was carried over the River Penk by the large Penkridge Viaduct. It began with two trains daily in each direction, to Stafford and Wolverhampton.

Heavy industry expanded in the 18th century, when a forge at Congreve was turning out 120 tons of iron a year, and in the 1820s the mill below Bull Bridge was used for rolling iron. However, this industry tailed off as the Black Country ironworks outstripped it. Extraction of building materials grew in Victorian times, with the Littletons operating quarries at Wolgarston, Wood Bank, and Quarry Heath, as well as a sand pit at Hungry Hill, Teddesley, and a brickyard in Penkridge.[8]

Penkridge in the 20th and 21st centuries has remained a small market town while evolving into a residential centre, but its ties to the land were weakened and those to the landed gentry broken. Residential development began even in Victorian times, with the middle-class villas of the St. Michael’s Road area, close to the railway.[9] The main Stafford-Wolverhampton road was greatly improved between the wars, reshaping both Penkridge and Gailey, paving the way for the great boom in private cars and suburbanization after Second World War.

The war itself prepared the way for changes. Teddesley Hall, no longer the Littleton's family home since 1930, was used to house troops and prisoners of war. The old common lands between the Penk and the Cannock Road were used as a military camp during the war years. This eased their subsequent development as a large housing estate, greatly enlarging the size and population of Penkridge in the 1950s and 1960s. Between 1951 and 1961 the population grew from 2,518 to 3,383 – a rise of over 34% in just ten years.

In 1919, the 3rd Lord Hatherton had begun disinvestment in land, often selling farms to their tenants. Over 2000 acres went in the Penkridge area, including land in the Deanery Manor, Congreve, Lower Drayton, Upper Drayton, Gailey, Levedale and Longridge.[10] In 1953 the 4th Lord Hatherton sold off nearly 4,000 acres, including Teddesley Hall, which was demolished within a year.

The M6 motorway came around Stafford in 1962 and connected with the M1 motorway in 1971, giving the town vastly improved communications. The long-awaited M54 motorway, shadowing the ancient Watling Street, opened in 1983, greatly improving regional links. Penkridge was now very favourably placed on a truly national motorway network. Since the arrival of the M6, the population has more than doubled, as new houses have spread along all the roads, particularly north and south along the A449.[11]

Penkridge has remained a substantial commercial and shopping centre. The major supermarket chains have not been allowed to open stores in the town and its only large store is a supermarket. Independent shops, cafés, inns and services occupy the area between the old market place to the east and Stone Cross on the A449 to the west. The area between Pinfold Lane and the river, long the site of livestock sales, has emerged as a new market place, attracting large numbers of visitors to Penkridge on Wednesdays and Saturdays.