Paxton is a small village just to the north bank of the River Tweed in Berwickshire and on the west bank of the Whiteadder Water. It is to be found near the B6461 and the B6460. It is half a mile from the boundary of Northumberland which turns from its course down the Tweed to heads north across country half a mile west of Paxton.

Paxton is a traditional, country village surrounded by farmland, and its closest market towns are Duns and Berwick-upon-Tweed.

Paxton is also the location of Paxton House.

Paxton Parish Church was built in 1908 as Paxton & Mordington United Free Church, though today it is part the Church of Scotland, in the Presbytery of Duns. The church stands on the main street of the village. 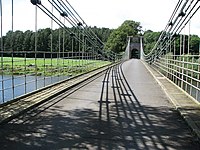 Just south of Paxton, in the neighbourhood of Fishwick, is the Union Bridge or Union Chain Bridge, a bridge over the Tweed, leading to Horncliffe in Northumberland.

When the bridge opened in 1820 it was the longest wrought iron suspension bridge in the world with a span of 449 feet, and the first vehicular bridge of its type in United Kingdom. Although work started on the Menai Suspension Bridge first, Union Bridge was completed earlier. Today it is the oldest suspension bridge still carrying road traffic. It lies on Sustrans National Cycle Network Route 1 and the Pennine Cycleway.

Traditionally home to villagers working on the land on in the salmon fishery on the Tweed, Paxton is said to be the birthplace of the song Robin Adair: