Paisley is the largest town in Renfrewshire. It stands on the northern edge of the Gleniffer Braes, straddling the banks of the White Cart Water, a tributary of the River Clyde.

The town forms part of a contiguous urban area with "Greater Glasgow"; Glasgow City Centre being 7 miles to the east.

The town came to prominence with the establishment of Paisley Abbey in the 12th century, an important religious hub in mediæval Scotland which formerly had control over the other churches in the local area.

By the 19th century, Paisley had established itself as a centre of the weaving industry, giving its name to the Paisley Shawl and the Paisley Pattern. The town's associations with political Radicalism were highlighted by its involvement in the Radical War of 1820, with striking weavers being instrumental in the protests.

The town was formerly known as Paislay.[1] The name is of uncertain origin; some sources suggest a derivation either from the Brythonic word, pasgill ("pasture") or passeleg (meaning "basilica"). However, other works suggest "Pæssa's wood/clearing", from the Old English personal name Pæssan leag. Pasilege (1182) and Paslie (1214) are recorded previous spellings of the name. 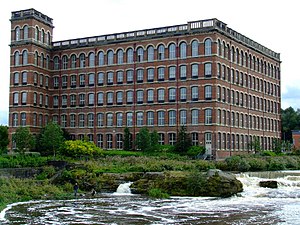 The Anchor Mills (1886) - a remnant of Paisley's Victorian industrial heritage.

Paisley has monastic origins. A chapel is said to have been established by the 6th/7th century Irish monk, Saint Mirin at a site near a waterfall on the White Cart Water known as the Hammils. Though Paisley lacks contemporary documentation it may have been, along with Glasgow and Govan, a major religious centre of the Kingdom of Strathclyde. A priory was established in 1163 from the Cluniac priory at Wenlock in Shropshire at the behest of Walter Fitzalan (d. 1177) High Steward of Scotland. In 1245 this was raised to the status of an Abbey. The restored Abbey and adjacent 'Place' (palace), built out of part of the mediæval claustral buildings, survive as a Church of Scotland parish church. One of Scotland's major religious houses, Paisley Abbey was much favoured by the Bruce and Stewart royal families. King Robert III (1390–1406) was buried in the Abbey. His tomb has not survived, but that of Princess Marjorie Bruce (1296–1316), ancestor of the Stewarts, is one of Scotland's few royal monuments to survive the Reformation.

Paisley coalesced at James II's wish that the lands should become a single regality and, as a result, markets, trading and commerce began to flourish. In 1488 the town's status was raised by King James IV to a burgh of barony.

Many trades sprang up and the first school was established in 1577 by the Town Council. By the mid-nineteenth century weaving had become the town's principal industry. The Paisley weaver's most famous manufacture were the shawls, which bore the Paisley Pattern made fashionable after being worn by a young Queen Victoria. Despite being of a Kashmiri design and manufactured in other parts of Europe, the teardrop-like pattern soon became known by Paisley's name across the western world.[2][3] Although the shawls dropped out of fashion in the 1870s, the Paisley pattern remains an important symbol of the town. The Paisley Museum maintains a significant collection of the original shawls in this design.

Through its weaving fraternity, Paisley gained note as being a literate and somewhat radical town. By this time there was a real mixture of religious opinions and healthy drink-fueled debate raged at night amongst the weavers, poets, merchants, masons and others. The poet Robert Tannahill lived in this setting, working as a weaver. The weavers of Paisley were also active in the Radical War of 1820. Paisley's annual Sma' Shot Day celebrations held on the first Saturday of June were initiated in 1856 to commemorate a 19th-century dispute between weavers and employers over payment for "sma' shot" - a small cotton thread which, although unseen, was necessary in holding together garments.[4] 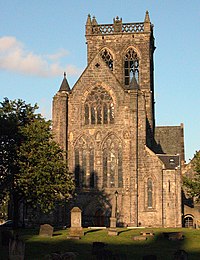 Paisley is home to a number of religious denominations and an important historical centre for the Christian faith in Scotland. The town's historic patron saint is Saint Mirin (or Mirren); according to legendary accounts, Mirin settled in Paisley as a missionary sent from Greece in the 6th century and was instrumental in bringing the relics of St Andrew to Scotland.[5] Paisley Abbey, one of the towns most significant landmarks, was built in the 12th century and raised to abbey status in the 13th. It served as an ecclesiatical centre for a wide area surrounding Renfrewshire for centuries until the Reformation where such religious centres were reduced to the status of parish churches. In the Church of Scotland, Paisley forms part of the Presbytery of Greenock and Paisley in the Synod of Clydesdale.

The industrial Revolution brought newcomers to Paisley and with them new denominations which form worshipping communities today. 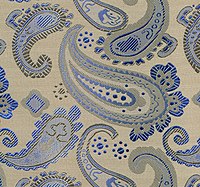 Silk square in the Paisley pattern

Paisley, as with other areas in Renfrewshire, was at one time famous for its weaving and textile industries. As a consequence, the Paisley pattern has long symbolic associations with the town. Until the Jacquard loom was introduced in the 1820s, weaving was a cottage industry. This innovation led to the industrialisation of the process and many larger mills were created in the town. Also as a consequence of greater mechanisation, many weavers lost their livelihoods and left for Canada and Australia. Paisley was for many years a centre for the manufacture of cotton sewing thread. At the heyday of Paisley thread manufacture in the 1930s, there were 28,000 people employed in the huge Anchor and Ferguslie mills of J & P Coats Ltd, said to be the largest of their kind in the world at that time.[6] In the 1950s, the mills diversified into synthetic threads but custom diminished rapidly as cheaper imports from overseas arrived and the establishment of mills in India and Brazil. By the end of the 1980s, there was no thread being produced in Paisley. Both industries have left a permanent mark on the town in the form of the many places with textile related names, for example, Dyer's Wynd, Cotton Street, Thread Street, Shuttle Street, Lawn Street, Silk Street, Mill Street, Gauze Street and Incle Street.

The town also supported a number of engineering works some of which relied on the textile industry, others on shipbuilding. Paisley once had five shipyards including John Fullerton and Company (1866–1928), Bow, McLachlan and Company (1872–1932) and Fleming and Ferguson (1877–1969). These have declined in the area, with engineering firms such as Fullerton, Hodgart and Barclay and Whites Engineering closing in the mid-1970s.

A number of food manufacture companies have existed in Paisley. The preserve manufacturer Robertsons which was founded in Paisley in the 1860s and operated there until the new owners closed its Stevenson Street factory and transferred work to Bristol, Manchester and London in the 1970s. Brown & Polson started producing starch and cornflour in Paisley in the 1860s. The company closed its works in Paisley in 2002. A number of industries remained in the area until recent times, the 1980s seeing a rash of closures and factories moving elsewhere.

Some manufacturing business remains, though the public sector is now a significant employer in Paisley. 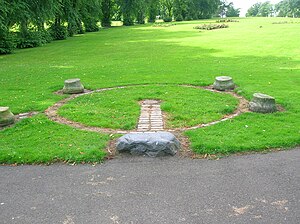 The Dooslan stane and the tolbooth bases in Brodie Park