Difference between revisions of "Paignton"

Paignton is a town on the south coast of Devon, on Tor Bay. It is a seaside resort, part of the holiday destination known as the "English Riviera".

Paignton has early origins. It is first mentioned in writing in the Domesday Book of 1086. It grew as a small fishing village and a new harbour was built in 1847. A railway line was opened to passengers in 1859 creating links to Torquay and London. As its population increased, it merged with the villages of Goodrington and Preston.

The historic heart of Paignton is in the streets around Church Street, Winner Street and Palace Avenue, which contains fine examples of Victorian architecture. Kirkham House is a late mediæval stone house in the town which is open to the public at certain times of year.[1] The Coverdale Tower is adjacent to Paignton Parish Church and is named after Bishop Miles Coverdale, who published an English translation of the Bible in 1536. Coverdale was Bishop of Exeter between 1551 and 1553 and is said to have lived in the tower during this period, although this is regarded as doubtful by modern historians.[2]

Paignton's economy relies extensively on tourism and the town is marketed as a location for family holidays.

In the Domesday Book of 1086, Paignton appears as Peintone. The name appears to be derived from Pæga's town.

Paignton was a small fishing village until the 19th century, when in 1837 the Paington (sic) Harbour Act led to the construction of a new harbour. It was around this time that the modern spelling of Paignton first appeared. 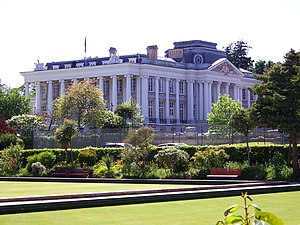 The railway line to Paignton was built by the Dartmouth and Torbay Railway, and was opened to passengers on 2 August 1859, thus providing Torquay and Paignton a link to London. The people of Paignton acquired the nickname of pudden eaters when thousands turned up hoping to obtain a piece of a huge pudding that had been baked to celebrate the arrival of the railway.[3] A Paignton Pudding was baked in 1968 to celebrate the town's charter, and another was baked in 2006 to mark the 200th anniversary of the birth of the engineer Isambard Kingdom Brunel

Oldway Mansion is a large house and gardens in Paignton constructed in the 1870s for Isaac Merritt Singer, who had amassed a considerable fortune by dint of his improvements to the sewing machine. The building is now occupied by Torbay Council.[4] Other Singer legacies in Paignton include the Palace Hotel and the Inn On The Green, which were built as homes for Singer's sons Washington and Mortimer respectively.

As Paignton's population grew, it merged with the coastal villages of Goodrington and Preston. 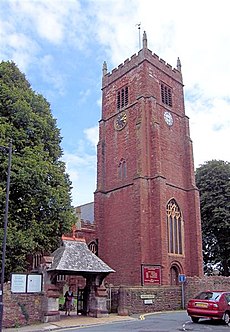 Paignton has some 18 Christian churches. The parish church (St John the Baptist with St Andrew and St Boniface) is in Church Street.[5]

The Festival Theatre, opened in 1967, was once a seafront theatre capable of staging large summer shows. In 1999 it was converted into a multiscreen cinema.

Regatta Week takes place during early August is the peak holiday season. During this period there is a funfair on Paignton Green, along with a large firework display. Later in August is Children's Week, which includes a wide range of events and competitions.

Paignton has a variety of holiday accommodation, complemented by numerous public house|pubs, nightclubs and restaurants. Tourist attractions include Paignton Zoo and the Paignton and Dartmouth Steam Railway, which operates steam trains from Paignton to Kingswear, from where a ferry can be taken across the River Dart to Dartmouth. The line was closed by British Rail as part of the Beeching Axe in the 1960s, and is operated today as a heritage railway line.

Paignton beach and the nearby Preston Sands are used for water sports including kite surfing and dinghy sailing.

The reed beds found at Broadsands beach are a haunt of the rare cirl bunting.[7] Elberry Cove is used by jetski enthusiasts, while Saltern Cove is a Site of Special Scientific Interest due to its distinctive geology.