Difference between revisions of "Oxburgh Hall"

Oxburgh Hall is a moated country house in Oxborough, in Norfolk. It was built in around 1482 by Sir Edmund Bedingfeld, and notably for its time, Oxburgh has always been a family home, not a fortress. Today the house is owned by the National Trust.

The manor of Oxborough came to the Bedingfeld family by marriage before 1446, and the house has been continuously inhabited by them since their construction of it in 1482, the date of Edward Bedingfeld's licence to crenellate.[1] 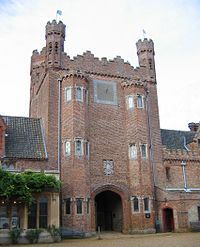 The courtyard front of the gatehouse

A fine example of a late mediæval, inward-facing great house, Oxburgh stands within a square moat about 246 feet on each side, and was originally enclosed; the hall range facing the gatehouse was pulled down in 1772 for Sir Richard Bedingfeld, providing a more open U-shaped house, with the open end of the U facing south. The entrance, reached by a three-arched bridge on the north side, is dramatised by a grand fortified gatehouse,[2] evoking the owner's power and prestige, though as fortification its value is largely symbolic; it is flanked by tall polygonal towers rising in seven tiers, with symmetrical wings extending either side that reveal nothing on the exterior of their differing internal arrangements. About 1835[3] the open end of the U was filled in with a picturesque, by no means archaeologically correct range that recreated the central courtyard. Other Victorian additions include the Flemish-style stepped gables, the massive southeast tower, the oriel windows overhanging the moat (illustration, left) and terracotta chimneys. Four towers were added to the walled kitchen garden.

The hall is well known for its priest hole. The Bedingfeld family clung to the Roman Catholic Church, and a priest hole was built it seems, to conceal in a hurry any Roman priest in the event of a raid. The room is small and disguised, and is reached by way of a trapdoor, which when closed blends in with the tiled floor. Unlike many similar priest holes, the one at Oxburgh is open to visitors.

The hall is also notable for its needlework hangings by Mary, Queen of Scots. She worked on these while in the custody of the Earl of Shrewsbury, following her escape to England. Other hangings on display were produced by Bess of Hardwick.

The estate has a number of woodland walks, including a 'Woodland Explorer' trail.

Oxburgh Hall is a popular location for film and television series, including brief appearances in the Dad's Army episode "Museum Piece", and later in You Rang, M'Lord?. It was the major setting for the 1994 television dramatisation of Love on a Branch Line, from the novel of the same name by John Hadfield. 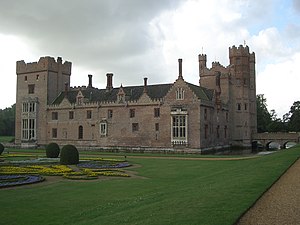 Oxburgh Hall and its Victorian pattern-parterre