Ottery St Mary is a little town in eastern Devon, the River Otter about 10 miles east of Exeter on the B3174. At the 2001 census, the parish (which includes the villages of West Hill, Metcombe, Fairmile, Alfington, Tipton St John and Wiggaton) had a population of 7,692.

The town was the birthplace of the Romantic poet Samuel Taylor Coleridge, where his father, the Reverend John Coleridge, was a well-respected vicar. The noted diplomat Sir Ernest Satow spent his retirement (1906–29) here at a house called Beaumont, which still stands. Sir Ernest was buried in the churchyard; there is a commemorative plaque to him in the church.

The place-name 'Ottery St Mary' is first attested in the Domesday Book of 1086, where it appears as Otri and Otrei. The name Oteri Sancte Marie is first mentioned in 1242.

The town takes its name from the River Otter on which it stands, which the river Otter takes its name apparently from the animal. The 'St Mary' element is the dedication of the parish church, and because in the Middle Ages the manor belonged to the church of St Mary in Rouen, as the Domesday Book records.[1] 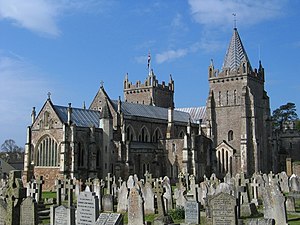 The parish church of St Mary's has been referred to as "a miniature Exeter Cathedral". Like the cathedral it is cruciform in plan, with transepts formed by towers[2]

Nikolaus Pevsner described the building as “lying large and low like a tired beast”. It is 163 feet long, and the towers are 71 feet high. It was consecrated in 1260, at which time the manor and patronage of the church belonged to Rouen Cathedral, as it had from before the Norman invasion. Pevsner assumed that the tower-transepts and the outer walls of the chancel date back to 1260, and that the towers were built in imitation of those at Exeter.[3]

In 1335 John Grandisson, Bishop of Exeter, bought the manor and advowson from Rouen and two years later converted the church into a collegiate foundation with forty members. He rebuilt much of the church, and the present nave, chancel, aisles and Lady chapel date from this time. The nave is of five bays, and the chancel, unusually long in proportion, is of six, with vestry chapels to north and south.[2][3]

The church is noted for its painted roof and early sixteenth-century fan vaulted aisle, the Dorset Aisle, designed and commissioned by Cecily Bonville, 7th Baroness Harington, whose first husband was Thomas Grey, 1st Marquess of Dorset.

The building was restored in 1850 by the architect William Butterfield. His alterations included lowering the floor level of the transepts, crossing and western part of the chancel to that of the nave, making the east end, designed for the needs of the collegiate foundation, more suitable for parochial use.[2][3]

The south transept (bell tower) houses the Astronomical Clock, one of the oldest surviving mechanical clocks in the country. It is commonly attributed to Bishop John de Grandisson, who was Bishop of Exeter (1327–69) and adheres to Ptolemaic cosmology with the Earth at the centre of the solar system.[4]

The church has ten misericords dating from the building of the church in 1350, five showing the arms of Bishop John de Grandisson. The church interior also has two mediæval carved stone green men. There is a small stone plaque commemorating the poet Samuel Taylor Coleridge in the south churchyard wall. Other interesting features include the tombs of Otho de Grandisson and his wife, the screen, sedilia, and a wooden eagle given by Bishop Grandisson.[5]

Ottery's notable buildings include the Tumbling Weir and St Mary's church. Also in the town is The King's School, once a respected village grammar school founded in 1545 by Henry VIII, but now a local authority comprehensive.

The town has been immortalised in episode 4 of series 2 of John Finnemore's BBC Radio 4 sitcom Cabin Pressure. 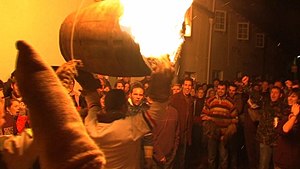 The town stages events around Guy Fawkes Night, 5th November, when, in a tradition dating from the 17th century, barrels soaked in tar are set alight[6] and carried aloft through parts of the town by residents.[7]

The festivities begin in the early evening with children's, youths' and women's events, culminating in the men's event when a total of seventeen barrels are lit outside each of the four public houses in the town. (Originally there were 12 public houses in the town). The barrels, increasing in size up to 66 pounds, are carried through the town centre, through streets packed with onlookers, in an exhilarating and risky spectacle.

Only those born in the town, or who have lived there for most of their lives, may carry a barrel.[8] Generations of the same family have been known to compete across the years. In recent years the event has been jeopardised by the demand for increasing public liability insurance coverage. Nevertheless, the event continues and the town's population of 7,000 increases at the event to well over 10,000. During the event all roads in and out of Ottery St Mary are closed for safety reasons with diversions in place.[9]

On 30 October 2008 the annual event was threatened by a severe hailstorm, which hit East Devon shortly after midnight; the Fire Service described the situation in the Ottery St Mary area as "absolute chaos".[10] The storm led to serious flooding in the town, caused mainly by storm drains becoming clogged with hailstones. Roads became blocked and the Coastguard service was required to airlift some people to safety. The flooding also caused problems on the Millennium Green, where the annual bonfire and fairground were being constructed in preparation for the 5 November celebrations. One of the owners of the fairground said that the builders working there were "lucky to be alive". The clear-up operation was entirely successful, however, and both the carnival procession and the Tar Barrels and bonfire night celebrations went ahead as planned.[11] 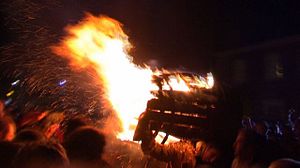 In 2009, the Factory Barrel was sabotaged by a visitor who threw an aerosol can into the barrel. The can exploded in the heat and 12 spectators required treatment for burns.[12] In an unrelated incident, the roof of the old fire station burnt down on the night of the 2009 tar barrels.

Pixie Day is an old tradition which takes place annually in June. The day commemorates a legend of pixies being banished from the town to local caves known as the 'Pixie's Parlour'.

The Pixie Day legend originates from the early days of Christianity, when a local bishop decided to build a church in Otteri (Ottery St. Mary), and commissioned a set of bells to come from out of county, and to be escorted by monks on their journey.

On hearing of this, the pixies were worried, as they knew that once the bells were installed it would be the death knell of their rule over the land. So they cast a spell over the monks to redirect them from the road to Otteri to the road leading them to the cliff's edge at Sidmouth. Just as the monks were about to fall over the cliff, one of the monks stubbed his toe on a rock and said "God bless my soul" and the spell was broken.

The bells were then brought to Otteri and installed. However, the pixies' spell was not completely broken; each year on a day in June the 'pixies' come out and capture the town's bell ringers and imprison them in Pixies' Parlour to be rescued by the Vicar of Ottery St. Mary. This legend is re-enacted each year by the Cub and Brownie groups of Ottery St. Mary, with a specially constructed Pixie's Parlour in the Town Square (the original Pixie's Parlour can be found along the banks of the River Otter).

An inhabitant of Ottery St Mary is known as an "Ottregian". One Sunday afternoon in 1898 six young men from Ottery St Mary, who were then living in London, met on the steps of St Paul's Cathedral, and resolved to form a Society to promote good fellowship among Ottery people wherever they may be. And so was founded the Old Ottregians Society, which took as its motto 'Floreat Ottregia ('May Ottery Flourish')" The Old Ottregians society still exists today (1997).

Sweet-breathing kine,
The old grey Church,
The curfew tolling slow,
The glory of the Western Sky,
The warm red earth below.

O! Ottery dear! O! Ottery fair! My heart goes out to thee,
Thou art my home, wher'er I roam, The West! The West for me!

"On 25 May 1866 a great fire occurred in Ottery St Mary. The fire started about noon and the raged through the homes and shops of about a quarter of the town, reducing everything to ashes. The fire started on Jesu Street where the charity schools formerly stood. At first some people believed that the fire had been started by children playing with matches, but subsequent investigation has now proved this to be incorrect. It appears that the fire was started by a woman burning rubbish and papers in her cottage fireplace on Thursday. The fire smouldered and eventually burned through the wall to the school next door. It was eventually discovered at the top of the staircase in the schoolroom, near the cottage chimney around noon on Friday. It then spread very rapidly. Within hours one hundred houses had been destroyed, and 500 people rendered homeless – 10% of the population. A great part of the town extending westwards from the school to the silk factory in Mill Street was reduced to a heap of smouldering ruins."[13]

One evening in July 1980, a disaster was narrowly averted when an aircraft on approach to Exeter Airport crash-landed just on the outskirts of the town, in a field immediately south of the Salston Hotel. The aircraft, an Alidair Vickers Viscount turboprop, flying 62 passengers from Santander to Exeter was eleven miles short of the runway over a wooded area on East Hill, just before the town, when it ran out of fuel and all four engines stopped.

The pilot, who knew the area, was able to bank left and glide over the town's southern edge and make a wheels-up crash-landing in a field. The aircraft was put down at 19.53 hrs, in daylight, near St Saviours' Bridge, in a small grassy valley studded with trees. The 27 year-old aircraft was written off in the crash.[14] The only casualties were two sheep.

One of the propellers from the aircraft was later donated by the airline to the town to be auctioned for charity.

One mile north-west of the town is the Elizabethan Manor House of Cadhay, the residents of which have had a long association with the church. The house has been occupied by the William-Powlett family since the 1920s and has recently been inherited by a furniture-maker nephew, Rupert Thistlethwayte. He has restored it to its previous splendour while introducing modern comforts such as heating and additional bathrooms, and contemporary furniture of his own to complement the antique furniture.

Sir Simon Jenkins in his book of England's Thousand Best Homes says: “The courtyard ….. with statues of Henry VIII and his three monarch offspring, Edward, Mary and Elizabeth ….. is one of the treasures of Devon.“